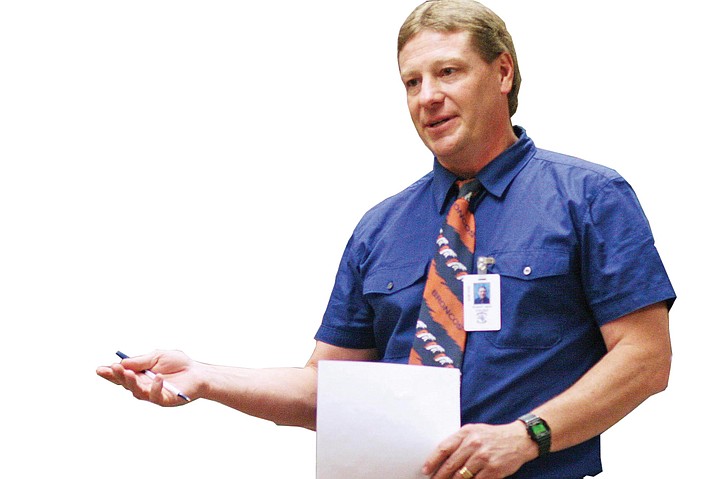 When he took over as superintendent at Cottonwood’s Valley Academy for Career and Technology and Education, Bob Weir was tasked with expanding the organization’s centralized programs. (Photo by Bill Helm)

COTTONWOOD – It seemed to always be that the Verde Valley’s Career and Technical Education programs – aka CTE – were of the satellite variety, meaning programs that were offered at local high schools.

Though beneficial for students attending those schools, the satellite programs were not as practical for students say at Sedona-Red Rock High School who may need a CTE course offered at Camp Verde High School.

When he took over as superintendent at Cottonwood’s Valley Academy for Career and Technology and Education, Bob Weir was tasked with expanding the organization’s centralized programs, which in turn will expand a student’s opportunity to train for the future while also gaining valuable college credits through additional CTE programs.

“A survey was the first step,” Weir said. “Gauging community interest, school interest. And then we worked on what were the good ideas.”

Though centralized programs are not 100-percent centrally located for each of area’s high schools, the idea is that they provide a more practical option for the region’s students who seek either short-term or long-term excellence in careers of a technical nature.

This year, Valley Academy for Career and Technology and Education – aka VACTE – offers centralized programs in fire science, nursing, welding, and digital film and television.

Recently, Weir approached the VACTE governing board with data from both the surveys and his research – and a desire to expand centralized offerings for the 2017-2018 school year. The programs that Weir is exploring include: Medical Assistant, Construction Technology, Lab Assistant, Heating and Air Conditioning (HVAC), Law Enforcement and Culinary Arts.

The additional centralized programs would be offered at either Yavapai College’s Clarkdale or Sedona campuses or Arizona Tech College, Weir said.

Though Camp Verde Unified School District already offers Culinary Arts at Camp Verde High School, again the benefit of expanding the centralized program offerings is to meet the needs of more students in a more practical way. When it comes to CTE programs, distance does not make the heart grow fonder.

With “tentative approval” from the VACTE governing board, Weir said his next step is to gather more information so he could approach the board again in January.

Besides adding programs, Weir told the board that he thinks some of the programs should be offered in the morning instead of the afternoon “because athletes don’t want to miss sports,” Weir said.

CTE courses provide both college and high school credits for enrolled students, with many of the programs funded by either VACTE or by grants.