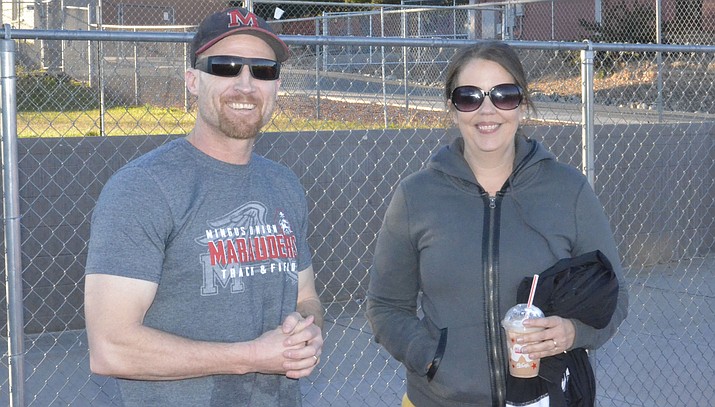 It is hard not to notice athletes running on the track as soccer practice is going on. However, right there with both the boys’ and girls’ soccer team getting ready for their first scrimmage of the season is handful of athletes running repeat 400s and sprinters in their starting blocks practicing their starts for a season that is over two months away.

Well, Mingus track coach Yancey DeVore and his wife, Jennifer, have taken it up a notch and started the Verde Valley Track Club to help bridge the gap between winter workouts and the start of the track season.

“Some of the athletes were interested in doing some track workouts in the off-season,” track coach DeVore said, “so I started a club under the USATF; they are members of USATF. It gives us the opportunity to come out here and work on some of the skills we will need for track and field. They do have a few winter meets; I’m not sure what that will look like for us. It just depends upon the interest of our athletes.”

On the first day of the program, there were a total of 10 athletes with sprint runners and distance runners participating in the workout, including his daughter ,Hannah. Hannah DeVore was third last year in the 300-meter hurdles at state, and seventh in the 100-meter hurdles.

“It just gives them something to do in the winter time if they are not involved in a sport,” DeVore said. “It allows them to work on their techniques, skills and fundamentals. There are some winter meets. Last year, we had some kids run unattached in some winter meets.”

The official track season starts under the Arizona Interscholastic Association in February. DeVore begins his sixth season as head coach.

“I’m always optimistic about track season,” DeVore said. “We will have a lot more kids out here. We have some very, very talented kids on our team. We have some gaps to fill and hopefully there are some kids walking the hallways that will come out for track.”

DeVore feels like he needs more boys to come out for the team. Assistant Coach Tiffany Goettl is back this year and former Camp Verde coach Steve Darby will help with hurdles. DeVore would also like to find more volunteer coaches for the throws and a pole vault coach.