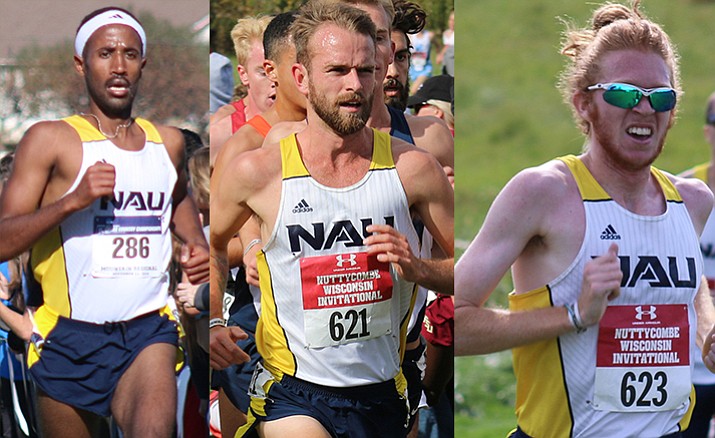 Colorado’s women’s team, considered the most dominant team in the nation all season, finished third behind Oregon and Michigan.

And in a historical sense, the men’s team title claimed by Northern Arizona University was an upset of sorts as the Lumberjacks had never won an NCAA Division 1 championship in cross country, or any other sport for that matter.

But for keen distance running observers, the NAU victory really did not come as a surprise. As NAU Athletics Communications Graduate Assistant Brian F. Campbell Jr. explained, this year’s Lumberjack team has “been undefeated this season, winning all six of their scheduled events by an average of 23 points.”

The NAU men placed two runners in the top 15 and three in the top 25 en route to the Lumberjacks’ NCAA title. Senior Futsum Zienasellassie was fourth overall, covering the 10-kilometer course in 29:49, a little more than one second behind Cheserek. Villanova senior Patrick Tiernan won the race in 29:22 and Syracuse’s talented junior Justyn Knight was second in 29:27.

NAU junior Matthew Baxter was 11th overall (9th in team scoring) with a 30:03 clocking. Sophomore Tyler Day covered the 10K course in 30:13 to finish 23rd individually and 18th in the team scoring. NAU’s No. 4 man was Tucson’s Andy Trouard, who was 37th individually and 29th in the team scores. Trouard, a 1500-meter specialist in the spring track season, showed great range by clocking in at 30:23 over 10,000 meters. NAU’s final scoring runner was junior Cory Climes, 84th overall, but 66th in team scoring. He finished the course in 30:46.

The NAU victory could not be a more perfect send-off for Coach Eric Heins, who steps down as the Lumberjack coach Nov. 30. Heins is moving to Houston, where his wife, Kaci, accepted an educator supervisor position at the Space Center in Houston, according to FloTrack, which also reported that Heins, “in his nine years at Northern Arizona … coached his teams to 26 Big Sky Conference Championships and produced eight top-10 NCAA finishes. In addition, Heins coached 11 athletes to All-American honors in cross country, and was named ‘Coach of the Year’ by the conference 24 times.”

Heins will be succeeded by Michael Smith. Smith, according to a Big Sky Conference release, “comes to NAU with championship experience and a background in altitude training. He spent the last four years at Georgetown University, most recently serving as the Director/Head Coach of the Men's and Women's Cross Country and Track & Field programs during the 2015-16 school year. Prior to Georgetown, Smith lived in Flagstaff for six years, and founded Team Run Flagstaff, while also working under Dr. Jack Daniels at NAU's Center for High Altitude Training, a U.S. Olympic Training Site for long distance running.”

According to Campbell, prior to Saturday’s NCAA win by the Lumberjacks, the NAU men had recorded eight top 10 NCAA finishes in the school’s history, 10 top 5 finishes and the ‘Jacks had claimed the NCAA runner-up spot three times: in 1988 and 1995 under former Coach Ron Mann and again in 2013 under Coach Heins.

NAU’s first-ever top-10 finish in the NCAA championships came in 1971 under former Coach Leo Haberlack when the Lumberjacks finished ninth in a race won by Oregon’s legendary Steve Prefontaine (29:14). NAU’s Richard Sliney finished sixth in that race in 29:47.

After being ranked as the nation’s No. 1 team all season, the University of Colorado finished a surprising third with 134 points. Oregon, led by the fourth-place finish by freshman standout Katie Rainsberger, won the team title with 125 points and Michigan was second, just one point back.

Missouri junior Karissa Schweizer won the individual championship by covering the 6-kilometer course (3.7 miles) in 19:14. Erin Finn of Michigan was second in 19:44; Notre Dame’s Anna Rhorer, a sophomore, was third, also in 19:44.

With sophomore Gilbert Kigen claiming his second individual crown in as many years for CAC, the Vaqueros won the team title with a low score of 49 points. Iowa Central, last year’s national champions, was second with 62.