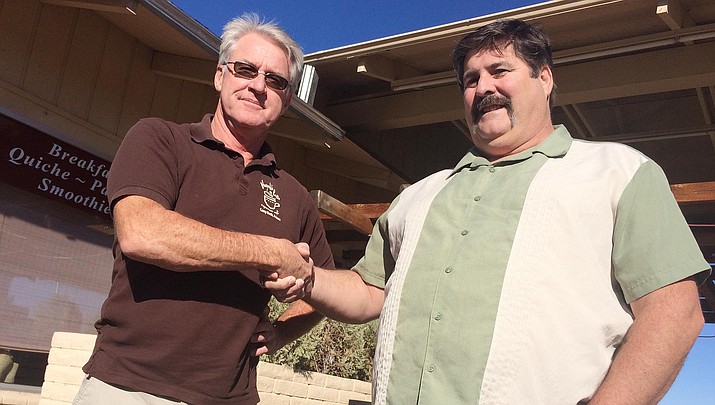 On Nov. 21, Thanks a Latte owner Paul Hawk, left, will hand over his Camp Verde business to Darryl Olinick. As the shop’s new owner, Olinick says he would like to add roasted and candied nuts to the menu, as well as cold brewed coffee. Other than that, Olinick says he won’t change the menu that Thanks a Latte patrons have grown accustomed to ordering from. (Photo by Bill Helm)

CAMP VERDE – Paul Hawk is in search of a new routine.

“Most guys are routine people,” he says. “And I am a routine person.”

For the past six years, Hawk’s routine has revolved around his Main Street business, Thanks a Latte. Come Tuesday, the Camp Verde resident will “have to develop a new routine.”

After trying to sell the family business the past few years, the Hawks – Paul and his wife Jan – finally found a buyer. Escrow closes on Nov. 21, so the Hawks will hand over the keys that night after the weekly Open Mic Night.

The next morning? Hawk says he may go to the gym.

“Been a member for a year and a half,” he says. “But I can only last about three months without being productive, being useful. Everything I have done has been service oriented.”

In a town that sees some businesses open, some close, some thrive and some fizzle, Thanks a Latte has held strong since September 2010. Though he looks forward to being a customer instead of the proprietor, Hawk looks back at six years with a bit of gratification.

“It takes a lot of hard work, dedication. And you can’t expect to get rich in this town,” Hawk says. “You have to be content with your earnings and be happy you have a business that people enjoy.”

At Thanks a Latte almost as long as Hawk is Amy Duncan, responsible for baking many of the shop’s decadent treats. For Duncan, it will be different seeing someone new in the proverbial driver’s seat.

A regular at Thanks a Latte for close to three years, Rimrock resident Alyssa Hill says she’ll “miss Paul being around, but the changes will be exciting.”

“I like to see small businesses grow,” says Hill, nursing her mocha.

Fell in love with Camp Verde

On a family vacation in May 2016, Darryl Olinick visited Thanks a Latte for the monthly Coffee with a Cop. That is when the former Riverside, California resident fell in love with the Verde Valley – and especially Camp Verde.

“People are very friendly, accepting,” says Olinick, who moved to Camp Verde in late-June with his wife, cat and two dogs. “The town has really welcomed me. And you can’t buy that. I walk down the street and people are waving at me. I drive down the street and people wave at me. I drive with one hand on the steering wheel and the other out the window waving back at people.”

Since his grandmother introduced him to iced coffee at age 10, Olinick has been a coffee lover – and he has especially developed a fondness for cold brewed coffee.

“The brewing process gives it a more crisp, cleaner taste,” Olinick says. “You don’t get the afterbite you do with regular coffee.”

So Olinick plans to bring his 15-gallon cold brew coffee pot to the store to offer customers the cold brewed coffee.

Olinick also plans to add roasted and candied nuts to the menu, such as locally-sourced candied pecans, honey roasted macadamia nuts and candied peanuts. Other than that, no changes to the menu Thanks a Latte patrons have grown accustomed to ordering from.

Open Mic Night will continue to be one of the community’s Monday night staple. “That’s a whole lot of fun for the town’s people,” Olinick says.

Olinick looks forward to signing papers at 10 a.m. Monday – and taking over as the town’s newest proprietor on Nov. 22.

And Paul Hawk just may be at Thanks a Latte. Just not behind the counter.