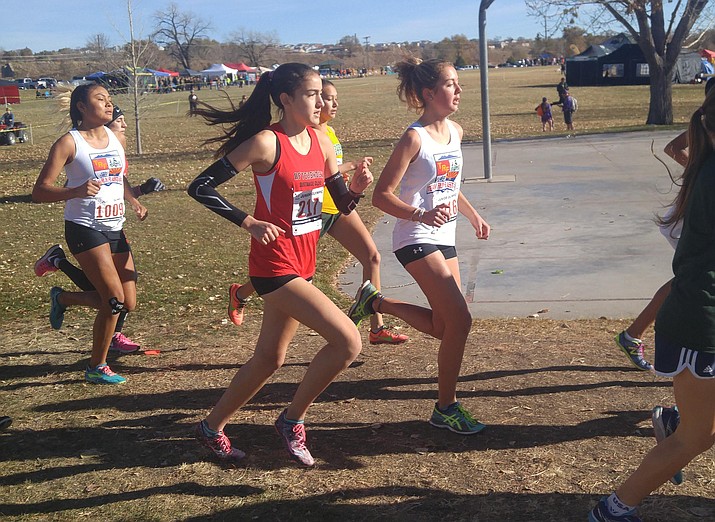 Allyson Arellano continued her winning ways, taking the 17-18 girls title with a comfortable margin of victory of more than half a minute. Arellano finished the challenging 5K course time of 19:19.8.

Strategy was the name of the game as Allyson took to the front early, continually altering and mixing paces to soften up a race field. It was very clear everyone was waiting for someone else to take the lead, making it possible to slow and speed things up, “yo-yoing” the race field. Finishing second among the 17-18 girls was Valentina Nyhart of Team Run Flagstaff/Flagstaff High School. The win gives Arellano her 2nd career Region 10 title and sets her up well to become a 3-time All-American in less than 3 weeks.

Racing in the 15-16 boys division, Josh Reilly (13th/17:50) and Trenton Stafford (19th/18:24) became first-time national qualifiers and regional medalists. In order to properly combat the elements and high elevation, both runners started out conservatively and moved up through the race field over the final half of the race.

Aftershock Coach Micah Swenson said, “The format is a little strange this year in the older age groups. To create more of a ‘team racing’ atmosphere, they have combined 15-16 and 17-18 races for the purpose of team scoring. Then, they separate back into the two age groups for individual honors: 15-16 and 17-18.”

All three athletes will be in competition at the Foot Locker West Regional meet on December 3rd as a final tune-up for nationals on December 10th. USATF nationals will be contested at Veterans Park in Hoover, Alabama

Arizona’s most dominant cross country team during the regular high school season, as well as the state’s most dominant runner, were not so dominant in Saturday’s Nike Cross Nationals Southwest Regionals in Casa Grande.

Desert Vista High School’s girls team dominated the competition in every race the school competed in this year, claiming the second through sixth places in the Division 1 state championship race.

But in Saturday’s Nike regional meet, competing as the Thunder Running Club, the Desert Vista runners were clearly off their form as they finished second to the Vista National XC Club of Colorado, 88-100.

In the individual race, over 5-kilometers, Colorado state champion and considered by many as the nation’s top prep runner, Brie Oakley, took top honors in 16:56. Four-time Arizona state champion Allie Schadler of Rio Rico was second in 17:17. Her younger sister, Samantha, finished 12th in 18:13.