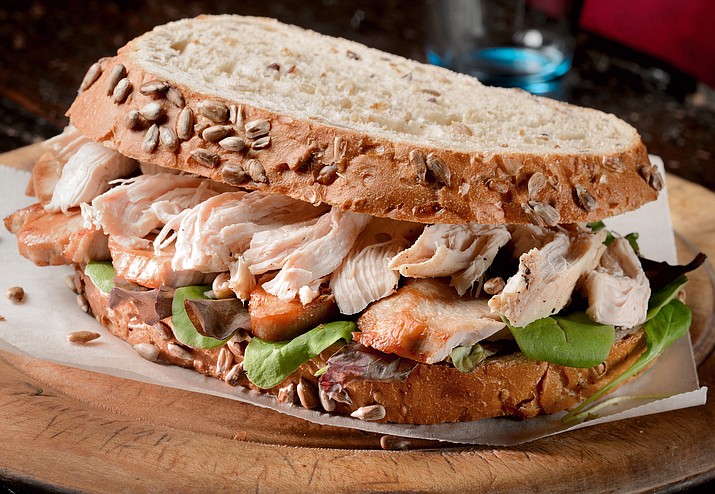 It has stood the test of time for Thanksgiving leftovers: a turkey sandwich, you can’t beat it, especially when there is a football game to watch. (Adobe Stock Image)

Sure, that sounds good the day after Thanksgiving. But what happens two days later when leftovers still dominate the refrigerator?

It’s time to get creative. Create a reason to crave those flavors, but in a way you don’t normally see that bird – or the stuffing.

Arizona and Mexican food go hand in hand. So why not make tacos out of the leftovers? Grab some tortillas, dice up some of that turkey, garnish with a little lettuce and cheese, maybe some salsa, and voila, turkey tacos!

Like Mexican food but prefer it saucy? Then make turkey enchiladas. Green or red sauce will do, hold the lettuce, add more cheese, some black olives, maybe garnish with some sour cream when it’s finished baking.

Actually, lettuce goes great with this dish – as the accompanying salad. After eating heaps of potatoes, stuffing, rolls and pie on Thanksgiving, it’s time to reintroduce a little ruffage to the diet.

Prefer a more hearty salad? Fine, make a turkey salad, and garnish with cranberry sauce and a few nuts.

OK, so not everyone likes spicy food. Maybe that’s why turkey and stuffing are the traditional American Thanksgiving dinner.

How about Shepherd’s Pie? It’s perfectly fine to swap out the red meat with the Thanksgiving turkey, toss in some veggies, mix in some gravy and top with some of the leftover mashed potatoes.

And since pie is for dinner, why not also have some leftover pie for dessert? Poor Atkins. Never knew what hit him.

Tacos, enchiladas, salad, pie, four non-traditional uses for turkey, right? Anyone who bought the 25-pound turkey is just getting started with the leftovers.

Come Sunday afternoon while watching (more) football, how about turkey sandwiches? But remember – get creative. Dice up more turkey, add some onion, celery, a little mayo for turkey salad sandwiches. Before adding the top slice of bread, top the mixture with a little stuffing and cranberry sauce and have the ultimate Thanksgiving sandwich.

Where’s the cheese? Then add cheese and make a super grilled cheese sandwich – and swap out the mayo for some of that awesome gravy.

The options are unlimited with Thanksgiving leftovers. Instead of making a tuna casserole, make a turkey casserole. Or add turkey to pasta, though red sauce may not be the way to go. Try an Alfredo sauce, or maybe pesto? How about drizzling it with extra virgin olive oil and some chopped garlic.

Or if there’s still some turkey gravy left over, warm up a little of that as the sauce. But definitely add garlic.

Granted, most of these leftover ideas have revolved around the turkey. But that’s because a 25-pound bird is more common than a 25-pound bowl of spuds.

And speaking of spuds, make some potato pancakes by adding some bread crumbs and an egg to bind the mixture. In fact, try sweet potato pancakes, if so inclined. Probably need more bread crumbs with the sweet taters. And don’t forget to season to taste. Potatoes always need a little pick-me-up.

None of these leftover ideas is rocket science, just mixing and matching flavor profiles to jazz up the traditional holiday food.

Disclaimer: Sorry, no suggestions on what to do with leftover dessert, other than to grab a fork, a glass of milk – and eat. Then repeat as needed.

Just remember to have your gym clothes clean before Thanksgiving – because afterwards, you’ll need them.