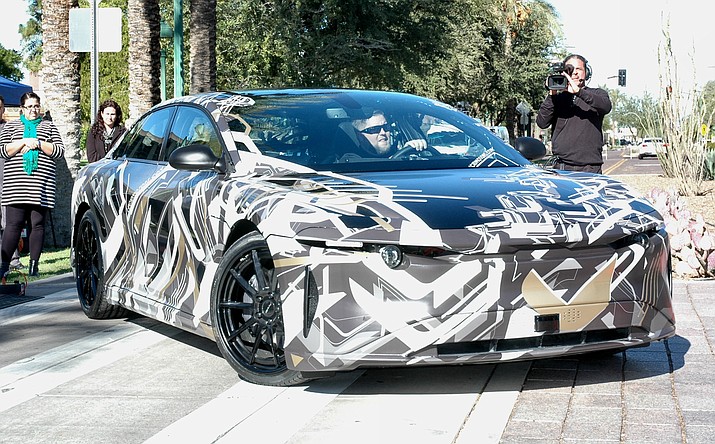 This is the prototype of what Lucid Motors says will become its $100,000-plus all-electric vehicle to be manufactured in Casa Grande. The unusual stripes are a form of camouflage to keep it from being recognized and copied by other car companies. (Capitol Media Services photo by Howard Fischer)

The plan by Lucid Motors, announced Tuesday, eventually will involve hiring 2,000 workers for what would be the state's only car manufacturing operation. The first hires will take place next year, with training of local workers for the jobs through the community and technical colleges in Pinal and Maricopa counties.

Sonora Gov. Claudia Pavlovich was part of today's announcement. That is because the plan involves having at least some of the parts built in Mexico and shipped to Arizona for final construction.

"This announcement proves without a doubt how bilateral relations can bring prosperity for our citizens when we work for a common goal,'' she said during the event in front of the old state Capitol. "Our two states together as a mega-region are a more attractive place for creating new business.''

Brian Barron, the company's director of global manufacturing, called Arizona the "perfect place'' for his company to set up production operations.

"Here, our team has access to an excellent workforce, forward-thinking institutions and a strong regional supply chain which certainly includes the state of Sonora,'' he said.

"Readiness was a key focus in the sight-selection process,'' Barron said, with the area coming out on top of 60 sites in 13 states that Lucid reviewed.

"This site is truly ready to go with the required infrastructure and solid attributes,'' he said. Barron also said Casa Grande is a short flight from the company's Silicon Valley headquarters.

"And it also has good proximity to rail, major interstates, ports , training facilities, utility providers and more,'' he said.

At this point, though, the vehicle is little more than an "alpha prototype'' for what Peter Rawlinson, the company's chief technology officer, said will get 400 miles on a single charge. He said it is now ready for beta testing; it will take until late 2018 for actual production to occur.

One big issue to be resolved is getting suitable batteries "that will maximize the energy density within a pack.'' That, Rawlinson said, will be paired with Lucid technology to create the most efficient use of the energy.

All this won't be cheap: Rawlinson told Capitol Media Services the first vehicles to come off the assembly line with be "north of $100,000.'' He said that puts it "right in the middle of the luxury sector with Mercedes-Benz, BMW and Audi.

"We will be able to reduce that price considerably as we introduce models that are more within reach as our production continues,'' he said.

How quickly Lucid can get to 50,000 vehicles a year, Rawlinson said, will depend on how the research and development goes.

"Quality constraints will determine the volume that we put out,'' he said. "We only want to build top-quality cars.''

Rawlinson brushed aside the idea that Lucid should focus initially on producing something that would be more affordable for most Arizonans and Americans. He said it's a question how consumers see the company and its vehicles.

"I think that it's very important ... to create a premium brand and image,'' he said.

In some ways what Lucid proposes to build will compete with what Tesla Motors already is producing.

The Model S is somewhat less expensive, with Tesla now touting its Model 3 with a $35,000 price tag.

But Rawlinson said that does not dampen what he said will be the market for what his company plans to sell.

"The world market for luxury products is vast,'' he said, saying Lucid sees Mercedes-Benz and BMW as its competitors, not Tesla.

"I really believe there's sufficient room in that marketplace for more than one electric vehicle manufacturer,'' Rawlinson said.

The 500-acre site is in an industrial area near Interstates 10 and 8. While most of the property already is within Casa Grande, some will need to be annexed.

Pinal County Supervisor Peter Rios said the deal involves the county purchasing the land which the company eventually will buy. He did not know the price but estimated it could be in the $250 million range.

Sandra Watson, president of the Arizona Commerce Authority, said her agency will be providing $5 million in grants. But she said this is not a give-away but instead based on the company creating the jobs it promised.

Ducey said landing Lucid Motors is more than about the jobs that will be created and the capital investment. He said it sends an important message about the state.

"Everyone looking to grow or start a new business should know: Regardless of what business you're in, your ingenuity and creativity have the opportunity to flourish in Arizona,'' the governor said. "As this announcement shows, we can stand toe-to-toe in attracting the kind of good-paying manufacturing jobs that every state in the nation is hungry for.''