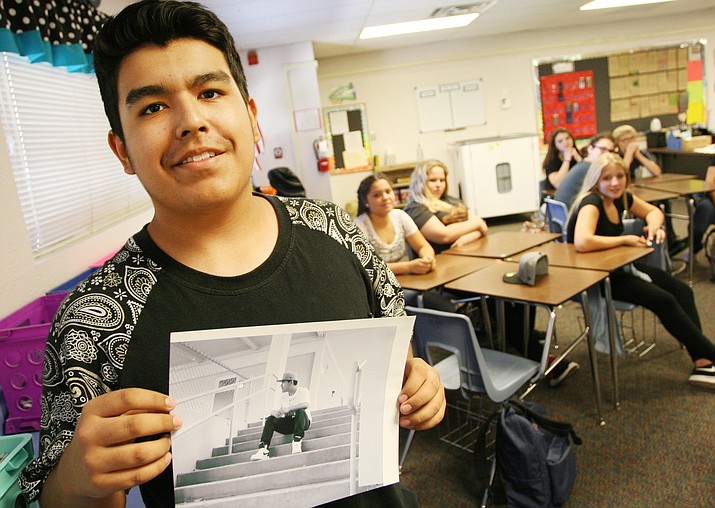 Cottonwood Middle School eighth grader Steven Ruiz shows the class his self-portrait. “I wanted half of my face in the photo,” said Ruiz. (Photo by Bill Helm)

Band students rehearse ‘Just the Way You Are,’ by Bruno Mars. “We’re trying to get our drumbeats down,” one boy said. (Photo by Bill Helm)

But Cottonwood Middle School is not just gearing its attitudes toward upliftment. The school now allocates its final 45-minute period of the day to an electives program that not only increases student engagement, but it also forges greater connections with the school’s educators.

“For the kids here, it was core subject after core subject,” said Principal Matt Schumacher. “The staff wanted to create an opportunity for students to pursue their interests so that CMS became a place where kids engage their curiosities, discover the many unique pursuits of this world, and spurn their intrinsic motivation that will drive their love of learning throughout the school day.”

Also motivated by declining attendance, Schumacher last spring presented to staff the idea of elective classes – an idea he said “they seized.”

“We needed to reduce our absenteeism rate, so we placed these courses at the end of the day to encourage attendance throughout the day,” Schumacher said. “After one day of implementation, the anecdotal evidence to support this statement is already evident.”

For the new program, teachers volunteered to teach an elective on a subject they were passionate about.

“A handful of teachers doubled up for very high-demand electives, like drama and sports performance,” Schumacher said.

Elective classes meet from 2:50 p.m. until 3:35 p.m. on Monday, Tuesday, Thursday and Friday – and they also combine students from sixth, seventh and eighth grades “who are traditionally separated during the school day to build camaraderie and provide a setting where peer-modeling can thrive,” Schumacher said.

Most frequently used in the Middle Ages, it was sometimes called a counterweight trebuchet or even a counterpoise trebuchet.

Now simply called trebuchet, it is a type of siege engine used to break or sidestep city walls and other fortifications.

In the Advanced Learners Program elective, also known as Gifted Instruction, Sara Bowers leads a group of young learners not only to assemble a kit trebuchet, but also to understand its history.

For example, the trebuchet was in use after the introduction of gunpowder.

A visual way of learning

One by one, students in Cristin Combs’ photography elective class showed their photographs to both teacher and fellow classmates.

“I wanted half of my face in the photo,” Steven said as to why his face was turned to his right as he is depicted in the image.

Eighth grader Hailey Archer also made a self-portrait, but with her holding a rose, which she said is “one of my favorite things in the world.”

Hailey, 14, wants to “be a professional photographer when I grow up.”

Eighth grader Angelina Cox said that thanks to Combs, she is learning “how to take good pictures.”

“She knows the right way to take pictures,” Angelina said. “That’s how we learn from her.”

Classes vary, from the more scientific STEAM and Robotics, to the more linguistic Newspaper, Spanish and Yearbook, to the visually stimulating Graphics Design, Film Studies and Photography, to the more musical Band and Choir. There are nearly two dozen choices for each student.

Electives last for one semester, as each student fills out a survey ranking his or her top four choices. Due to space availability, many students end up taking classes in something other than their preferred area of interest. Because this program is ongoing, eighth graders receive first choice. Any student whose class is their fourth choice is “prioritized” for the following semester.

Schumacher’s goal at Cottonwood Middle School is to “build camaraderie among the students in support of our Capturing Kids’ Hearts initiative by providing a setting where peer-modeling can thrive.

“If we can achieve this level of cohesiveness, the peer support system will allow students to take healthy academic risks with the knowledge that a universal support system is present to catch them if they fall,” Schumacher said.