Dead and undead alike to thrill at Jerome Ghost Walk 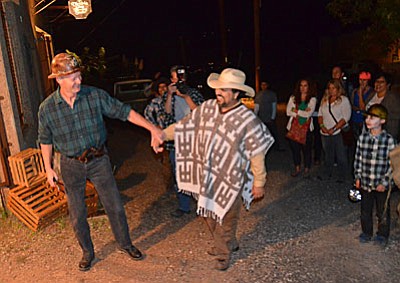 Attendees go bump in the night during last year’s Jerome Ghost Walk. ‘Voices from Jerome’s past: Gone but not forgotten” is the theme of the 13th annual event. (VVN/ Vyto Starinskas)

JEROME - Crumbling walkways, spooky old buildings and century-old relics may be a recipe for Halloween in other towns. But for Jerome, it's just another night on the town - - except for the added twist of being visited by denizens of the past during the sold-out 13th Annual Jerome Ghost Walk, Oct. 7 and 8.

"We always been tight-lipped. We don't want to let the 'cat out of the bag,'" said Jay Kinsella, general manager of the event's host, the Jerome Historical Society. "I can tell you this: The baseline for the story comes out of research on Jerome's cemeteries."

Entitled "Voices from Jerome's past: Gone but not forgotten," lucky ticket-holders will enjoy (or endure) nine separate scenes played-out during a dark stroll among Jerome's reputedly haunted byways and buildings. According to the historical society, the century-and-a-quarter old Town of Jerome once was a billion dollar mining camp, reaching a population of 15,000 when it was the fourth largest city in the Arizona Territory.

"This is our time of the year to open the archive and pull out some stories. We can prove these stories true based on historical facts," Kinsella said. "The stories that we tell in all of our ghost walks, we can back-up. Our archives don't lie."

Guided walks begin every half hour between 6:30 p.m. and 9 p.m. at Spook Hall (the now-defunct J.C. Penney store at 260 Hull Avenue). The estimated 540 tickets for this year's event sold briskly after being announced June 24 on the Town of Jerome Facebook page.

"It used to be just locals in Cottonwood and Clarkdale attended. As we got to the fifth annual event, it started to be more diverse - - people from Prescott, Williams, Flagstaff, things like that. Flash forward to the 13th event and we have people all the way from Tucson and Phoenix. We actually have people who have a block of 25 tickets - - that type of thing," said Kinsella.

"We keep it to 45 people per performance to make sure everyone has the opportunity to see what's going-on," he said. "The bottom line is that this is our yearly premier fund-raising event."

Were it not for the establishment of the Jerome Historical Society in 1953, the town may not have survived the pull-out of the mining industry. When Phelps Dodge began bulldozing buildings, the society purchased much of Main Street in 1956 and to this day owns eight buildings.

Those attending the event are advised to wear comfortable shoes (no high heels). For more information, visit www.jeromehistoricalsociety.com or phone 928-634-1066. Memberships to this 501c non-profit begin at $15 and include free admission to museums (including the popular Mine Museum and Gift Shop at 200 Main St.), 15 percent off gift shop and online purchases, a subscription to the Chronicle Newsletter and one free hour of research.