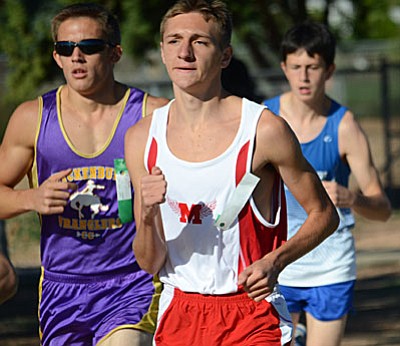 Mingus senior Ryan Alexander has been the most steady performer for the Marauders this season. Friday, he turned in a 17:53 performance for 5,000 meters in the Desert Twilight meet. (Photo by J.T. Keith)

CASA GRANDE - The Desert Twilight Cross Country Invitational has emerged as one of the premier meets in the Southwest and what makes it so unique is that it offers something for everyone.

From middle school competition to a community race and every level of competition in between, Verde Valley runners had a buffet line of races from which to choose Friday at Desert Twilight.

Team-wise, the Mingus Union boys' squad continues to impress. This week, the Marauder runners had six boys crack the 20-minute barrier for 5,000 meters as Mingus finished a respectable 14th out of 53 teams in the Small Schools Boys Varsity Division.

Individually, Camp Verde sophomore Dominic Pittman has shaved nearly 4 minutes off his 5K time in the past month. Friday, he clocked in with a 19:08 medal-winning performance in the Boys Small School Open race. Keep your eye on this kid as he finished 16th in a field of 340 runners.

Not to be outdone, Coach Micah Swenson's Aftershock Running Club trio of Josh Reilly, Trenton Stafford and Allyson Arellano all turned in excellent performances in the Twilight Community Race. Reilly and Stafford, both sophomores at the American Heritage charter school, recorded respective times of 17:23 and 17:48 for the 5-kilometer course to finish 17th and 29th overall.

Arellano was well off her normal form, said Swenson, with a 19:01 clocking, nearly a minute slower than her time on the same course one year ago.

Reilly and Stafford, said Swenson, are "Major works in progress. They are putting in the work though."

As for Arellano, Swenson said the Mingus Union senior is still recovering from Achilles blister problems and is currently over-burdened with college recruitment demands.

With 367 runners in the Small Schools Boys Varsity Race, the Mingus boys were paced by the 1-2 punch of seniors Keegan Cain and Ryan Alexander. Cain finished 30th overall in 17:43 while Alexander was 10 seconds back in 49th place. Junior Jon Ulibarri clocked in at 18:15, while sophomore Cody Wager (19:20), freshman Lucas Doerksen (19:30) and senior Zack Peek (19:56) all eclipsed the 20-minute barrier.

On the girls side, there were 327 runners in the Small Schools Varsity race. Junior Hannah DeVore and sophomore Meg Babcock turned in identical times of 21:47 for 55th, and 57th place, respectively.

• Rio Rico senior Allie Schadler continues to make a strong case for herself as the best girls' high school runner in the nation. The defending three-time state champion remains unbeaten this year and turned in a 17:03 5K performance Friday.

• At the elite level, Arizona girls can run with anyone in the nation and they are getting better every year. Friday, 11 girls ran under 18 minutes at Desert Twilight. Abi Archer (4th in 17:31) of Chaparral and Jesselyn Bries (10th in 17:43) of Sandra Day O'Connor are juniors. Samantha Schadler (3rd in 17:27) of Rio Rico and Morgan Foster (5th in 17:36) of Chandler are only sophomores. Brooklyn Christofilis (8th in 17:38) of Desert Vista is a freshman.

• Desert Vista High School, considered by most ranking organizations as one the three best teams in the United States, is as dominant as any high school team in Arizona history. Senior Baylee Jones paced the Desert Vista effort Friday by finishing 7th in 17:38. Desert Vista placed all five of its scoring runners in the top 15 to win the meet by 62 points over runner-up Air Academy High School of Colorado. The Desert Vista team average for the 5K race was 17:57, which individually would have placed a runner in 11th place, and had a scant 36-second gap between the team's No. 1 and No. 5 runners.

Among Arizona boys this season, trying to determine the best runner in the state has been a moving target. Central's Aron Orar was impressive early in the season, but he has since fallen behind Brophy Prep runners Hociel Landa and Luke Mason. In Southern Arizona, Buena's Manuel Olivo-Quinones has dominated. Up north, Chinle's Santiago Hardy may be the best in Arizona. He has a season PR for 5K of 15:16, the best time in the state so far this year.