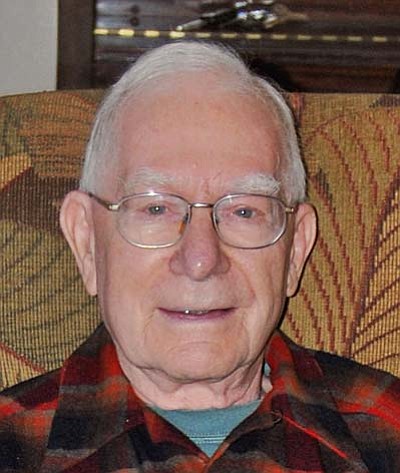 He was born in San Benito, Texas on August 12, 1921 to Otis and Gertrude Gilmore.

Orville served in the Army Air Corps in England and France during World War II.

They were married 69 years, before Alice passed away in 2015.

A teacher of English and Humanities, "Mr. Gilmore" touched and inspired thousands of high school and college students.

Orville and his wife Alice retired to Gunflint Lake in Northern Minnesota, and eventually settled in Cottonwood, AZ in 1993.

Orville was an avid reader and loved birding, boating, and being outdoors.

He and his wife camped and traveled through 49 of the 50 states over the years.

Both participated in the Cottonwood Public Library book discussion group for many years and he was a Yavapai County Master Gardener.

He was a very talented wood worker, making many beautiful pieces.

Orville was preceded in death by a son, Donald, and his wife Alice.

He is survived by daughters Catherine Karppinen (Mahlon) of Glyndon, MN and Constance Gilmore (Michael) of Cottonwood, AZ.

Both Orville and Alice will be interred together at the Maple Hill Cemetery in Grand Marais, MN next summer.