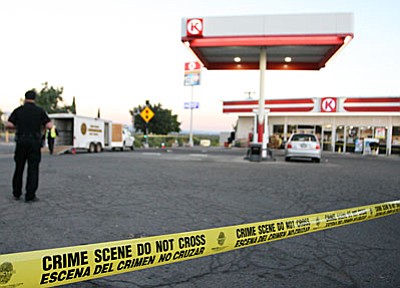 Camp Verde Marshal's Office investigates a homicide that took place at approximately 2:20 am Monday at the Circle K on Main Street. (Photo by Bill Helm) 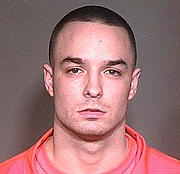 CAMP VERDE - It is believed that a Phoenix man is responsible for the shooting death of a 31-year-old Camp Verde man early Monday morning.

The Camp Verde Marshal's Office is looking for Levi Jones, 27, in connection with a homicide at about 2:20 a.m. at the Circle K in Camp Verde on Main Street, said CVMO Commander Jacqui MacConnell.

Early Monday, Jones and a female friend are believed to have approached the unidentified male victim and another female in the parking lot at the Circle K, MacConnell said.

"The victim and a female were here at the Circle K when the suspect and another female parked here," MacConnell said. "They obviously all knew each other."

According to MacConnell, the two females then began fighting when the suspect approached the victim and fired "at least one round" at the victim.

Before the man died, he was treated by Copper Canyon Fire and Medical Authority, MacConnell also said.

According to MacConnell, Jones is "still at large" and driving a 2011 Hyundai Sonata, Arizona license place BRH 4045.

The investigation is ongoing, said Marshal Nancy Gardner. The Camp Verde Bugle will provide updates as they become available.