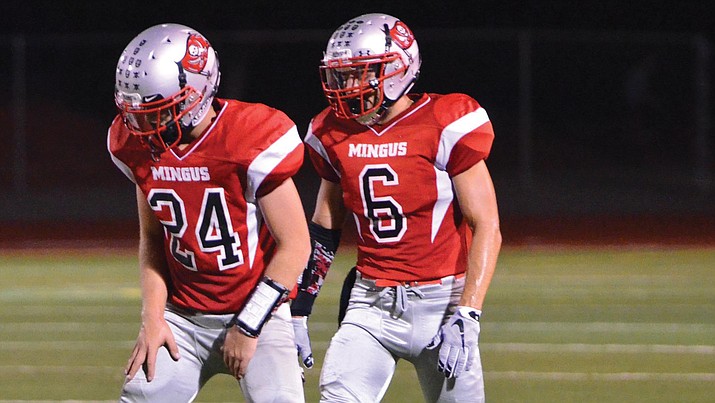 On both sides of the line of scrimmage, (#6 )Alejandro Stabreff has been a sustaining force for the Mingus Marauders this season.

Verde Independent Athlete of the Week is Alejandro Stabreff. He made big hits all game against Prescott High School on Friday night. He picked up a fumble and returned it for 30 yards. On the fumble recovery, he was playing safety down in the box playing his receiver for pass first. He saw the ball and thought scoop and score, but the quarterback ran him down.

On the pass he intercepted, he did as his coaches have taught him to read the quarterback’s shoulders and break on the ball. On offense, he rushed for 40 yards and caught three passes for another 40 yards. With three games left in his career with the Marauders, Stabreff hopes his last game will be in the state playoffs. He may get his wish.

Verde Independent: Mingus’ defensive backs are starting to get together and play better.

Stabreff: Yeah. We are finally starting to get better. After the last loss against Bradshaw Mountain, our seniors came together and felt like they have to step up and aid our offense.

Verde Independent: Does it bother you when you face passing teams like Higley?

Stabreff: I know that teams are going to make plays and score, I just try to stay up and keep the young guys up as well. Every team gets their battles, but we want to win the war.

Verde Independent: How do you keep your young defensive backs up?

Stabreff: We burn each other on seven on seven, so we concentrate on playing technique. Higley tested me all night, because they had a kid who was faster than me. I just kept moving on to the next play. That’s what we try to teach the younger guys, move on to the next play.

Verde Independent: What is your time in the 40-yard dash?

Verde Independent: Do you plan on trying to play college football next year?

Stabreff: I would love to play college ball. I have some interest from Iowa University and University of Arizona.

Verde Independent: What is your best victory?

Stabreff: It would be last year after we beat Bradshaw Mountain at home. Because those were the kids who beat up on us in middle school, and we were never able to beat them. And all those kids we finally got a chance to redeem ourselves.

Verde Independent: What does it mean to wear the red and gray?

Stabreff: It means a lot actually. To grow up from the ranks of little Lobos and wanting to play under the Friday night lights. It is finally coming to an end; I’m just trying to savor every second I have.

Verde Independent: Do you have any personal goals?

Stabreff: Yes, every Wednesday we do a circle drill. We do 14 up downs for 14 games. Even though we had a rocky start, we know that we had a really hard schedule, and we have gone all out every game. We believe that we can make the playoffs if we keep working hard.

Verde Independent: What is your favorite dessert?