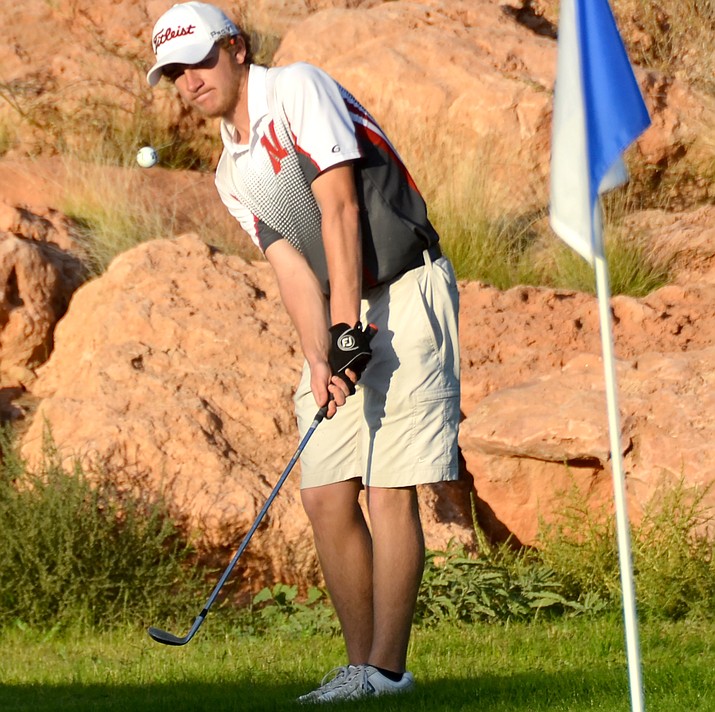 Mingus Union’s Keagan Lamb hits a shot in match play at the Verde Santa Fe on Wednseday. Maruaders are making a run for state this season.

Ninth-year Mingus Union golf coach Craig Mai says his team is sitting pretty. He believes the Marauder golfers have the talent and drive to make it to state. His team started strong, went through a lull and with two weeks left in the season, they seem to be playing their best golf.

“We are really playing well these last three weeks,” Mai said. “If we can just play solid this last week and a half, I think we can win our section and qualify for state down in Tucson.”

Mingus is in second place behind Anthem Prep in the section. In nine-hole matches this season, the Marauders have won four times and come in second twice.

Coach Mai measure success over the course of four years. In golf, he explained, talent varies, and it takes a lot for a high-school student to become comfortable being a competitive golfer. Mai thinks high school golf is cyclical in talent, and how they develop.

Three years ago his team struggled, and they finished in the back of the pack. In those years, Mai felt it was important to let the golfers learn to play the game and get experience. Last year was a competitive season and Mai believed this would be the team’s year to push for wins and contend for titles and state.

The future looks bright as well. This year’s team has three seniors, three juniors, three sophomores and three freshmen. The cupboard won’t be bare when this class graduates. Keagan Lamb is Mingus’ No. 1 golfer.Senior Travis Nester holds down the No. 2 spot with positions 3 through 5 nipping at his heels.

“We are much better than last year,” Mai said. “We have been playing really well in our matches. This team has been our best team in the last four years. Our goal this year is to qualify for state.”

The Marauders will return to action at Verde Santa Fe, in a match play against Prescott, Anthem Prep, and Page, on Oct. 21.