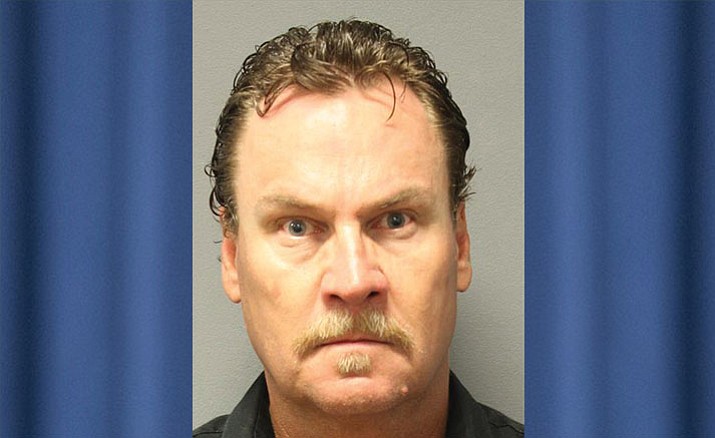 He is charged with attempting to lure a 19-year-old female employee and two 12-year-old girls for sexual exploitation at the Cottonwood Recreation Center July 2. Reber, 48, of Nevada, had spent time at the recreation center, and placed notes in front of all three of the victims. The notes invited the victims to meet him at the men’s restroom at Garrison Park.

According to Patti Wortman of Yavapai County Attorney’s Office, the notes said to meet him in the stall in 10 minutes, and “got what you need – promise you.”

The 19-year-old employee read her note, and then saw Reber drop notes in front of the minors sitting on the couch. The woman intercepted the notes and called police.

Upon arrest, Reber was found to have a pipe on him containing methamphetamine residue.

Reber accepted the plea deal, and plead guilty to one count of luring a minor for sexual exploitation, a class 4 felony; one count of a possession/use of methamphetamine, a class 6 felony; and one count of disorderly conduct, a misdemeanor.

When Judge Bluff asked Reber if he attempted to lure the 12-year-old girls for sexual exploitation, he said yes.

The disorderly conduct charge stems from the 19-year-old’s experience from the ordeal, which she found upsetting – interfering with her ability to perform her job.

For the luring of a minor charge, Reber faces between 1 and 3 ¾ years of prison time, with a 2 ½ year presumptive sentence.

For the dangerous drug charge, he faces between 1/3 of a year to 2 years of prison time, with a 1 year presumptive sentence.

For his presumptive probation term, Reber faces not less than 4 years and up to a lifetime for the luring of a minor charge, and up to 3 years for the dangerous drug charge. Judge Bluff said the probation term is appropriate, and is considering placing him on a lifetime length initially.

Under the terms of his probation, Reber will be prohibited from contact with children, required to undergo treatment, and abide by other requirements set forth. He could also be forced to pay restitution to the three victims.

Defense attorney Renee Mendelsohn asked to have 60 days to prepare for the mitigation. Reber’s sentencing hearing is scheduled for Dec.13.