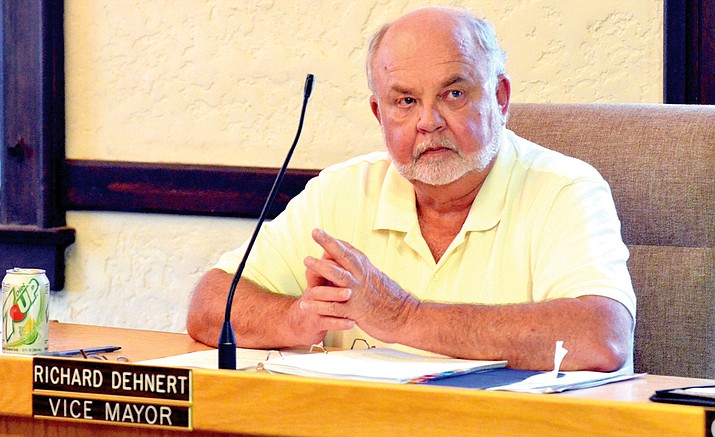 Vice Mayor Richard Dehnert: “Prohibition doesn’t work ... you can’t legislate morality. Find solutions because they make sense, not because they are forced upon you.”

CLARKDALE – Despite a solid contingent of civic-minded youth seeking to ban tobacco sales to those under the age of 21, Clarkdale Town Council decided to delay a vote on the proposed ordinance until its concerns could be clarified at its next regular meeting.

The Yavapai County Anti-Smoking Coalition of Youth are approaching municipalities to enact tobacco bans for those under 21 years of age. They cite the demonstrated health risks associated with tobacco use and the missed opportunity for early intervention of youthful users. So far, they have been successful in the neighboring City of Cottonwood, where the sale as well as the use and possession of tobacco for those under 21 years of age has been illegal since June.

This was the second presentation by YATCY (a local spin-off the national youth-led group Tobacco21.org). It first approached the Town of Clarkdale during an Aug. 9 council meeting. At that time, several town officials shared their personal battles with nicotine addiction. However, where members of council parted ways at the Oct. 11 meeting was whether the solution was best met with education or with regulation.

“My guess is you are going to get your under-21 tobacco passed,” conceded Vice Mayor Richard Dehnert, saying earlier that “prohibition doesn’t work - - you can’t legislate morality. Find solutions because they make sense, not because they are forced upon you.”

The proposed ban against selling tobacco products to those under the age of 21 would be enforced by the Yavapai County Community Health Services, as well as state officials and possibly local law enforcement if witnessed. Violations would be considered a civil infraction to be adjudicated by the magistrate court, subject to penalties of a fine, court costs and mandatory re-education by county health.

Jen Mabery, health educator, Yavapai County Community Health Services, was accompanied by scores of YATCY supporters who filled the majority of available seats in the clubhouse. A number of YATCY presenters made their case, citing statistics on tobacco-related health issues and the progress made by municipalities that have banned tobacco sales for those under 21 years of age.

YATCY President and Mingus UNION High School swimmer Gunner Tillamens cited results from Needham, Massachusetts, the first municipality to raise the legal age of tobacco sales from 18 to 21 back in 2005.

Of concern to YATCY is the two-edged sword of introducing youthful addiction to toxic substances. According to Tillamens, smoking delivers 28 carcinogens known to cause cancer, and that 3.5 percent of high school students and 1.6 percent of middle school students have tried smokeless (yet nicotine-filled) products.

Dr. Richard Brady, Ph.D., D.V.M. testified as to the positive impact that Cottonwood’s ban on youthful tobacco sales made on his veterinary practice, located on Main St. south of Cherry Rd.

Brady said that prior to the ban, young tobacco purchasers loitering around an adjacent retailer were spilling-over onto his practice, creating issues of smoke and crowding. Now, the problems have disappeared.

“It is a complete difference, a major success for a business owner,” he said, “as well as for the health of the people and pets.”

YATCY concurred, reporting that it had surveyed Clarkdale-area businesses and found the majority were in support of the ban, with one respondent saying “it’s mostly older people buying.”

Council was unanimous in praising the caring and enthusiasm expressed by the civic-minded YATCY students. In fact, Mayor Doug Von Gausig pointed-out that it was on the behest of Council members Curtiss Bohall and Bill Regner that the proposed ordinance was brought before council.

However, council was not yet unanimous in making under-21 tobacco sales a civil offense.

At issue was the wording of the proposed ordinance, which is based on Cottonwood’s law. Concerns surfaced about inadvertently banning anti-smoking therapies such as nicotine-based gum and patches. Also unknown were the penalties for conviction, as well as how to handle non-tobacco but nicotine-containing vape products. Yet a philosophical question also re-surfaced: “When is a person an adult?”

“At age 18, you can vote, serve in the military, marry, drive a motor vehicle and many other privileges associated with being an adult. You also have the right to make stupid decisions. The antidote to stupid decisions is education, not government regulation,” said Dehnert.

While commending YATCY efforts “to improve the health of our community and exercise civic engagement” as well as “giving us great hope for our future leaders,” Dehnert voiced that their efforts might be focused in an alternative direction.

“Please resist the urge to use government as a way to impose your beliefs on another or to restrict an otherwise legal act,” Dehnert said, “but instead, use your energy to continue to seek facts and educate your peers.”

Reconciling letter of the law with spirit of the law

One sticking point in the quest to curb youthful tobacco use in Clarkdale would be the continued sales on the sovereign Yavapai-Apache Nation (YAN) just across the street. As with other communities, members have their own views on this issue: Some are represented on YATCY; others would point-out that tobacco (“uuva” in Yavapai and “nát’oh in Apache) was used prior to European colonization and that it serves a cultural as well as economic role.

Members of YATCY said that they are reaching out to the YAN and that students from the Native American Club “were very supportive of the subject” and that they “hope to present this with YAN council members.”

As the proposed ordinance stands, members of council indicated a willingness to pass the measure, provided the following questions were answered at its next regular session: 1) The status of nicotine-withdrawal aids such as chewing gum and patches 2) the status of non-tobacco but nicotine-containing vape products and 3) the total penalty for violation, including fines as well as court costs.

“You are asking us to adopt an ordinance that will become the law of the Town of Clarkdale, enforced by law enforcement and the health department. We don’t feel comfortable passing an ordinance in which the penalties are not clearly defined,” said Denhert.