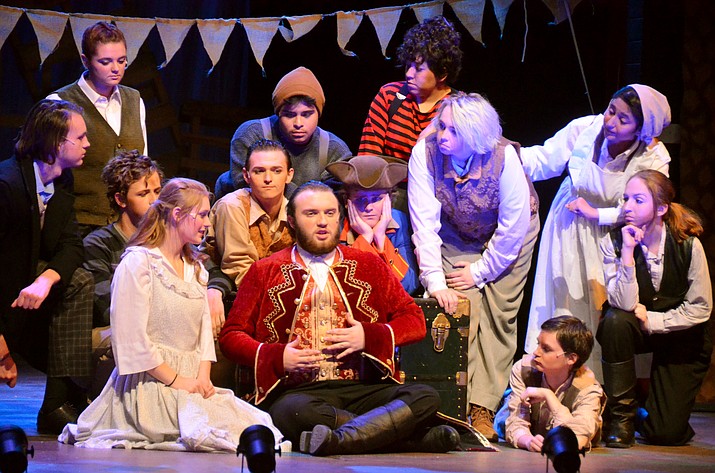 A.T.O.R.T. rehearses for their upcoming production of “Peter and the Starcatcher” that opens Oct. 28. (VVN/Vyto Starinskas)

COTTONWOOD – Mingus Union High School cast and crew of “Peter and the Starcatcher” are ready for Friday’s opening night.

“Peter and the Starcatcher” is prequel to Peter Pan and is based on the children’s book by Dave Barry and Ridley Pearson and freely adapted for the stage by Rick Elice.

Director James Ball said the audience will find out how Peter receives his name and meets Molly - the mother of Wendy; and will watch how Black Stache loses his hand before he is infamously known as Captain Hook.

The story revolves around two different ships, said Ball. One ship is carrying star stuff (future pixie dust). They get switched, and the evil captain tries to get the treasure. They end up shipwrecked on an island which is named Neverland, after the ship.

“The whole thing is an epic journey,” said Ball.

Ball said this piece of theater is very different than what he’s done before.

Ball said he loves the physicality, humor, and great script. The actors play multiple parts (from pirates to doors) and they all work to narrate the story.

The play has a cast of 14, and a crew of 30. The set is built by the technical theater classes, and all sound effects are done by live people.

Ball’s favorite scene is the opening of Act II, also known as the mermaid scene.

“It cracks me up every time,” said Ball.

A.T.O.R.T. has grown over the years to include two teachers, 9 theater classes, and up to 250 kids enrolled. It is a full time department complete with a technical director, assistant directors, choreographers, and a costume designer.

Technical director and designer Jeff Neugebauer said that every single one in his class has hands-on experience in the productions from start to finish.

Some of the department’s students go on to pursue careers in theatre and technical theatre.

Regarding future productions, there will be auditions soon for January’s “Charlie’s Aunt” January, and “Fiddler on the Roof” is slated for April.

What: “Peter and the Starcatcher” presented by A.T.O.R.T.

How much: Tickets are on sale at www.showtix4u.com for $9 for adults, $8 for seniors, and $6 for students and children. People may also call the box office at 928-649-4466 or purchase the tickets in person at the MUHS bookstore. Tickets cost $2 more when purchased at the door.