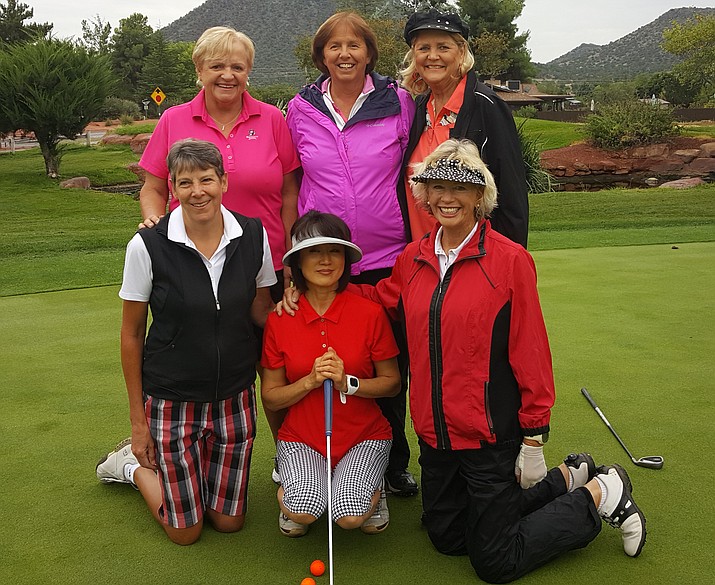 Lori Zaun, Donna Cantello, Liz Chang and Julie Larson played most frequently for the OCCWGA Team. When vacations interfered with the schedule the strong playing of Penny Fischer, Kathy Davidson, Marion Maby and Barbara Erickson stepped up to represent the club.

The most competitive contest is Team Play, which is an accumulation of scores from nine tournaments from April through September.

Each participating club sends four of the lowest handicap players who are available to play a “better ball” team event. Points are earned by winning the hole for 1 gross point and 1 net point; a tie earns the team a half point.

We are happy to announce that the Team from Oakcreek Country Club (OCC) has once again demonstrated that they have some of the best women golfers in our region by winning the overall low gross!

The season began April 11 with the eight teams coming to Oakcreek. The home club does not compete and therefore has no advantage over the visiting clubs.

April 28th we played at Verde Santa Fe and in May the tournaments were at Prescott Lakes and Capital Canyon.

Talking Rock and Antelope Hills hosted our June competitions while July took the team to Continental Golf Club in Flagstaff. August found us at Elephant Rocks in Williams with our final Team play event held at Quailwood in Prescott on September 12.

Lori Zaun, Donna Cantello, Liz Chang and Julie Larson played most frequently for the OCCWGA Team. When vacations interfered with the schedule the strong playing of Penny Fischer, Kathy Davidson, Marion Maby and Barbara Erickson stepped up to represent the club. Congratulations to all!

As the name implies, this golf outing is made up of a team of four ladies all from different golf clubs with handicaps from a high of 40 to a low of 1!

Each participating club selects a chair (Carol Meiner is the OCC chair) who meets in early spring to set the schedule of play for the year.

The hosts club arranges the teams and insures a delicious lunch follows the game. This event is a fun team game where the winning groups are determined by the combined net score of two of the members.

This means that those with a higher handicap are valued because they may have two points subtracted from their gross score for the net score!

It all makes for much laughter and lots of fun out on the course. So, if you live on the OCC golf course I am sure you have heard and seen the ladies out there having fun while staying young!