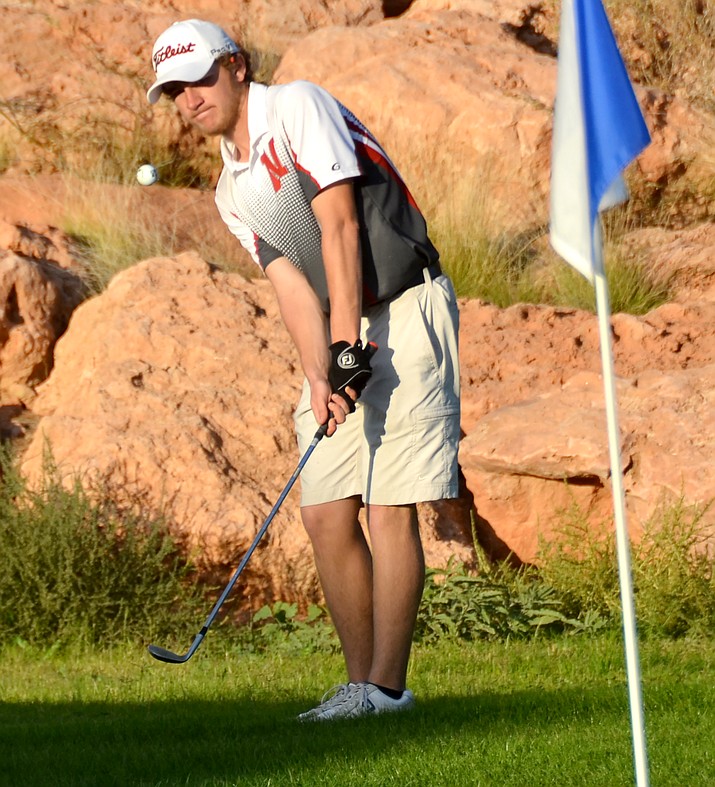 The hardest part of a dream is waiting. Waiting on others to finish the race to see if your effort was good enough.

The Mingus Union golf team not only had to come from behind as they played out the last two weeks of the season, but they also had to wait on Anthem Prep. Anthem Prep was up by a couple of strokes heading into the final week of the golf season.

The Mingus team continued to put pressure on Anthem Prep by closing fast and taking a lead that was insurmountable for them to overcome; they finished second to the Marauders in their last tournament of the season. The news came to the Marauders on Tuesday after practice that they had qualified as a team for state; the first since 2009 for Coach Craig Mai.

The good news for the Marauders is that if the team had not qualified, Keagan Lamb still would have gone to state based on his play this year.

“What made us such a good team was that Lamb was our No. 1 player,” Mai said, “but the other four you could count on three of the four players to play well and picking their teammates up. It didn’t matter who was playing well. The other schools in our region might have one or two players playing well, but they didn’t have the depth we had as a team.”

The team should be competitive for years to come; the Marauders are taking two seniors, two juniors and two sophomores. This experience should do nothing but fuel their fire to get better and continue to play golf at a high level.

Coach Mai’s plan was to teach his seniors how to compete after their last state run in 2009. On that team, they had to replace seniors Gary Baker and Ryan Sullivan, who had been the team leaders. Mai hatched a plan to allow his younger players to gain confidence and discover their golf game.

He would not add any pressure. He wanted them to notworry about the result, but just get experience, and learn how to play competitive golf. In their junior year, he wanted them to be competitive and fighting for wins. And this season was a season to go for wins and titles. The Marauders did that, they were in every match, and if they did not win,a they finished in second place.

“We lived that plan,” Coach Mai said. “It was hard work and dedication, and guys believed in it. I would like to thank Verde Santa Fe and Coyote Trails for their wonderful support for our youth golfers.”

At state, there is an individual competition and a team competition. If Lamb plays well as an individual, he could finish in the top 10 regardless of how Mingus performs as a team. The team works this way; each day Mingus will have five players playing, and they take the top four scores.

Some of the thought from the team as they head to state:

Keagan Lamb: “It feels really good to be going to state. I want to play my own game.”

Travis Nester: “I’m pretty pumped my senior year that we are going to state once in my career. I’m glad I didn’t quit earlier this year. I worked on my swing and put in the hard work, and I’m glad I stuck with it and focused. I’m’ going to try to be All-State.”

Justin Tanner: “To make the state as a sophomore is really a great opportunity. It is a great thing for me to be here and the whole team to be here. It will give me some momentum for the future to get better.”

The team plays the state tournament on Monday and Tuesday at the Randolph North Golf Course in Tucson.