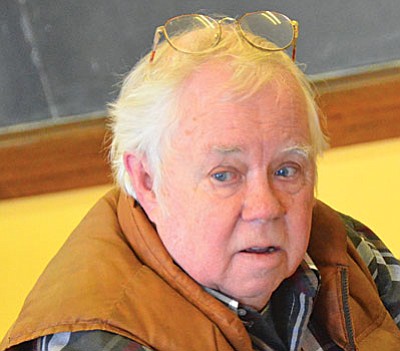 Jerome's mayor says, "This is what happens when you don't listen to your original instinct "

As election night unfolded and familiar names in Verde Valley politics were either crushed by little-known opponents or granted skinny margins of victory, perhaps no greater surprise emerged than the toppling of popular Jerome Mayor Lew Currier, an active resident since the 1960s who has a total of 10 years of service on town council.

"I wasn't sure I wanted to run because it was time for maybe some new people to come-in. Well, people would keep coming-up to me and saying, 'You should run.' This is what happens when you don't listen to your original instinct, I guess," Currier said.

Currier's two years as mayor dealt with such challenges as crumbling infrastructure, vacation home owner lawsuits, controversial new sales taxes and emergency water shortages. Although all members of council had a say in the process, it appears Currier suffered backlash from voters shunning established candidates, as experienced by Pam Pearsall in the county assessor's race and Terence Pratt in the Cottonwood mayoral contest.

While new to the ballot, Kinsella is not new to Jerome politics, having previously served as mayor, vice-mayor and council member.

According to Town of Jerome Manager Candace Gallagher, "This is complicated by the fact that we don't know yet how the write-in votes break down. Here are some scenarios: If one write-in candidate received at least 74 votes, that person would also be elected at the primary, and Lew Currier and the other write-in candidate would face a runoff in the general election for the fifth seat. If neither write-in candidate received at least 74 votes, Lew Currier, Dwain Dement and Jay Kinsella would advance to the general election to fill the two remaining seats."

"Every dog and kid must have turned out to vote," said Town of Jerome Clerk Joni Savage.

What is known is that some candidates went to sleep Tuesday night thinking that they had won the election, only to find-out otherwise on Wednesday morning. For example, Jerome's 9:36 p.m. primary results showed Bachrach had secured a one vote lead over Vander Horst (71 versus 70), with "100 percent reporting." However, five hours later, Vander Horst rose to 93 votes and Bachrach to 90, putting Vander Horst in first place - - which in Jerome potentially means the mayoral seat, if enough votes are earned.

"Based on the number of votes tallied so far, if those are final, Hunter Bachrach, Alex Barber and Frank Vander Horst have won in the primary. If either of the two write-in candidates received at least 74 votes, he would also win. We won't have that info from the county until sometime next week, I am told," said Gallagher.

According to a media release by the Yavapai County Elections Department, "There are approximately 11,000 early ballots and 100 provisional ballots still (to) be verified and counted as of 10 a.m. Aug. 31."