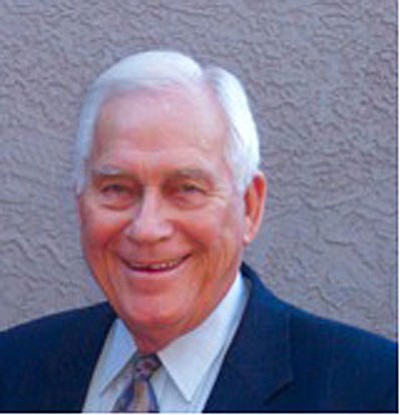 Louis Ernst Oestmann, 94, of Cottonwood, was welcomed into heaven by his Lord Jesus on August 30th, 2016. He passed away in Cottonwood after a short illness.

Louis was born the youngest of six children on the family homestead near Auburn, Nebraska on May 25, 1922 to Ernst Friedrich Franz and Minna Sophia (Bohling) Oestmann. He was raised on the farm, performing chores from the age of 5. He graduated from Auburn High School in 1939 and then remained on the farm, taking over the main operations from his father at age 17. When World War II began, he wanted to enlist in the service, but his father was not well enough to run the farm, and since farms were listed as necessary for the war effort, he was given a government deferment until January 1945, whereby he joined the U.S. Navy. During basic training, his beautiful tenor voice drew attention, and he was chosen to sing in the Blue Jacket Choir, which made an appearance on the nationally popular Edgar Bergen-Charlie McCarthy radio show. He was further trained as a radioman and was assigned to various ships until the war in the Pacific ended.

Louis met his wife of 70 years, Ruth (Busse), during the war in 1942. They married on September 5th, 1946 after he had been discharged from the Navy. They returned to the farm in Nebraska where Louis raised corn and enlarged their herds of swine and cattle. Their first three sons were born in Auburn.

Louis began to suffer from severe asthma and was encouraged to sell the farm, so he and Ruth moved the family to Sandpoint, Idaho in early summer 1956. He found a job working for the Bonner County Credit Bureau, and within a year he became owner of the business. There the couple was blessed with 2 more sons and a daughter. During the 15 years spent in Sandpoint, Louis was dedicated to involvement in his community and church. He became president of the Idaho Collectors' Association and won a national award for community service through the national association. He also loved serving through his local Kiwanis Club.

Louis was a man of strong faith and loved to serve the Lord through his singing. He sang with the choir of First Lutheran Church in Sandpoint and continued to sing solos for weddings and funerals, as he had done throughout his life. He also served in many leadership positions for the congregation.

The sunshine of the Southwest and the lack thereof in Idaho drew Louis to Arizona. He and Ruth once again uprooted and made their home in Cottonwood in 1971. He was a realtor until opening the KFC in 1973, later building 2 more restaurants in Payson and Sedona. Being mission minded, Lou and Ruth helped found Faith Lutheran Church and served faithfully through 25 years. They have been members of Rock of Ages Lutheran Church in Sedona for the last 20 years.

They continued to raise their 6 children, supporting them through school, sports, college, and business endeavors. A man of great integrity, his generous and compassionate spirit touched many.

Lou and Ruth retired for the first time in 1983. They enjoyed travel throughout America and Canada in their RV. But at age 64, Lou began another business adventure with Ruth, opening Ruth's Hallmark gift store in 1986. Fifteen years later, at age 79, he finally retired for good, although the couple continued to travel for another 10 years.

One brother and four sisters preceded Louis in death. He is survived by his beloved wife of 70 years, Ruth; his five sons, Dale (Fran) of Pine, AZ; Roger (Chris) of Post Falls, ID; Tim (Debbie) of Mission Viejo, CA; Joel (Jana) of Sedona, and Kevin (Jamie) of Gilbert, AZ; and daughter Lisa (Neil) Rosenow of Cottonwood. Nine grandchildren, nine great-grandchildren, and many nieces and nephews also survive him.