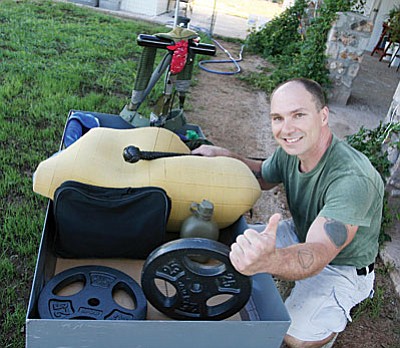 Because his dogs Luke and Ginny would need to go too far between water stops, Camp Verde resident Cedric Nye will put weights in his trailer for his 10-plus mile run to raise money for the Verde Valley Humane Society. (Photo by Bill Helm)

CAMP VERDE - After years of abuse from his father, Cedric Nye felt helpless. And defenseless. So he left home.

A runaway as a pre-teen, Nye spent the rest of his youth "in the system."

"I took off. I kept taking off," says the Camp Verde resident, now 40. "By 13 I was in juvenile hall. Spent two to three years there, then halfway houses, a foster dad thing. He'd have six, eight, 10 boys staying there. I went to places like that."

Because of the beatings "always [with] the fist" from his father that led to PTSD, Nye now lives each day to "do something to help someone."

That's why Nye is taking pledges and donations for the Verde Valley Humane Society as he plans a 10-plus mile run.

"I know what it's like to need help," said Nye. "I bounced around to all the places. Not unlike the places where animals go. Basically I'm trying to make the world within my reach a better place."

This isn't Nye's first charity run. In 2014, Nye ran with a trailer - and his two dogs on it - to raise month for the Arizona Humane Society. Since his two best friends would have to go too far between water stops, Nye says he will put weights in the trailer to simulate the heaviness of his dogs. Though it seems like a lot of work to be charitable, Nye says it's "not super complicated."

"Children and animals, they bear the weight of our degeneracy," Nye says. "The trailer shows people that this means a lot to me, the weight of the issue. I can afford the blood, sweat and tears. So why not run?"

Nye calls the event the Riff Raff Run in honor of his friend's dog, who recently passed away. Beginning at about 6:30 p.m. Sept. 24, Nye will run from Arena Del Loma near the I-17 overpass down Montezuma Castle Highway to Main Street, through downtown to SR 260 heading east until he reaches Forest Service Road 626.

"If I feel strong enough to keep it up, I'll keep going," Nye says.

Donors can pledge per mile, or they can donate a specific amount. "All donors will have their names posted in a pinned post on this event, and will be mentioned and thanked in a YouTube video," Nye says.

All donors will also be put into a drawing for a custom self-defense keychain from Camp Verde Rope and Gear, Nye's self-defense supply business.

"If you cannot afford to pledge money, please pledge your time by sharing this event [on Facebook]," Nye says.

All pledges and donations will go directly to the Verde Valley Humane Society.

Camp Verde man running for money for Jerome Humane Society
Aftershock runners give back to community
101 animals find homes at Pet-A-Palooza
Adopt for Life
Petapalooza: 250 animals looking for a home