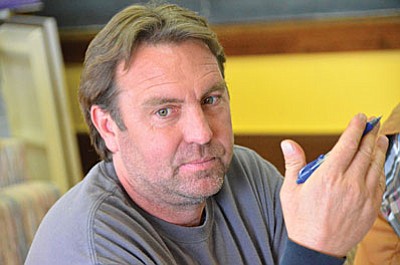 JEROME - The four remaining members of Town of Jerome Council will be tackling a resignation, a "sliding jail" and a former employee's EEOC suit - - among other things - - when they meet Sept. 13 at 7 p.m.

"Abe was a perfectly good council member. He was interested, he was dedicated, he did his homework," said Jerome Mayor Lew Currier. "He had good thoughts and opinions."

Stewart was elected to a two-year council term in 2014 but did not run for re-election. He was also a Captain/Firefighter/EMT with the Jerome Fire Department. Stewart grew-up in Jerome but has since moved out-of-state.

During its Tuesday night meeting, council will discuss the vacancy created by Stewart's resignation and may appoint someone to fill the remainder of his term. The Aug. 30 primary determined that Frank Vander Horst, Jay Kinsella, Hunter Bachrach, Alex Barber and Lew Currier are eligible for seats on the 2016-2018 council.

"Sliding Jail" still on the move -- in more ways than one

Town council will discuss a request by the Jerome Historical Society to have the "Sliding Jail" revert back to their ownership 52 years after being deeded to the Town of Jerome. The society is of the opinion that the barricaded jail and the parcel it resides on is not providing recreational facilities for the general public.

"We have taken care of the property and the 'Sliding Jail" as well, until the land started moving underneath. There's a big crack outside the fence and it's still in motion as far as I can tell. Until it stops moving, the town doesn't want to endanger anybody," said Currier.

Currier went on to say that engineers have told the town that subsidence has rendered the building unsafe, but that the society's engineer believes otherwise.

"It seems they think they can do something with it. I'm not pushing them to have it, but I'm not getting in the way of them taking it, either. I've told them I'd love to see what you can try to do on your dime," Currier said.

Council may enter into executive session to discuss with the town attorney an Equal Employment Opportunity Commission complaint filed by a former employee. According to the agenda, the complaint involving unspecified actions was made by former Town of Jerome employee Ron Shelly. The town declined further comment citing privacy laws.

Among other items to be considered during Tuesday's council meeting is lifting a forty-year ban on beekeeping. The request was introduced last session by Council member Alex Barber and supported by Mayor Currier, who said it was put in place after a resident who no longer resides in Jerome was stung by a bee.

"I'm looking for some clarification on issuing burn permits," said Blair. "There's been complaints to the town manager when we let people burn to alleviate fire fuels. My solution is to offer prior notification. We can't have select people keep us from creating fire zones."

Churning back to resurface in town council's agenda is Senate Bill 1350 - - otherwise known as the prohibition on banning vacation rental homes. Council will consider resolving to "take all necessary actions working with the Arizona State Legislators, Yavapai County Supervisors and League of Arizona Cities and Towns to overturn or amend Senate Bill 1350." Vice Chair Doug Freund sponsored Resolution No. 541 upon recommendation of the Jerome General Plan Steering Committee. Freund has expressed frustration in the past with SB 1350 in the past, saying it nullifies local zoning and planning.

The Town of Jerome Council meetings are held at Town Hall, 600 Clark St.