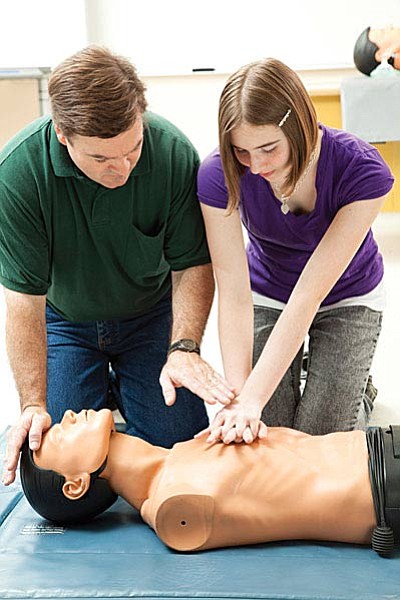 In 2011, the AHA found that 326,200 people experienced out-of-hospital cardiac arrests in the United States. Of those treated by EMS, 10.6 percent survived, with the survival rate increasing to 31.4 percent when in the presence of bystanders.

According to the American Heart Association (AHA), most people who experience cardiac arrest die because they don't receive immediate cardiopulmonary resuscitation (CPR).

In fact, the application of CPR by a "Good Samaritan" can more than double a person's chances of survival.

In 2011, the AHA found that 326,200 people experienced out-of-hospital cardiac arrests in the United States.

Of those treated by EMS, 10.6 percent survived, with the survival rate increasing to 31.4 percent when in the presence of bystanders.

To encourage more people to become first responders as opposed to bystanders, the AHA has joined forces with other agencies in offering "Hands-only" CPR training. No longer do responders have to memorize ratios of breaths-to-compressions. The goal now is to get blood circulating as quickly as possible.

"Hands-only" CPR training involves two steps: 1. Calling 911 (or sending someone to do that) and 2. Pushing hard and fast in the center of the chest.

The AHA reminds us that there is a right way and a wrong way to make a 911 call. Callers should remain on the phone until the 911 operator says it's OK to hang up. They may offer lifesaving suggestions over the phone once first responders have been dispatched. Also, be specific with address details, as cell phones are not associated with a fixed location.

Step 2: Pushing hard and fast in the center of the chest

If a person collapses with no pulse or breathing, the AHA trains bystanders to push hard and fast in the center of the chest. The AHA recommends that chest compressions be done to the beat of the Bee Gees' song "Stayin' Alive," which has the correct beat for "Hands-only" CPR.

Why "Hands-only" CPR is critical to patient survival

"Statistics show that the minute it's recognized and bystanders do chest compressions, the patient's chances of survival are increased up to 10 fold," said Trautman "If you go four to five minutes - - even three minutes - - with no blood circulation, your chances of resuscitation really drop."

This timeframe is supported by the Brain Injury Foundation, which found that patients can suffer irreversible brain damage in as little as three minutes after the loss of circulation.

"Our strategy is to go from being reactive to being proactive. It's to get citizen doing this to make us all safer," he said. "Remember, your hands are their heartbeat."

Getting trained in CPR