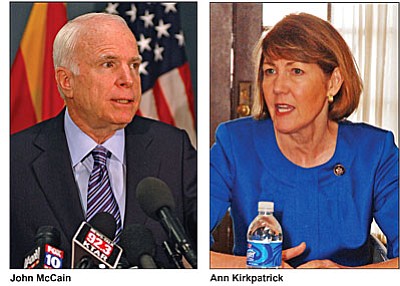 PHOENIX -- Democrat Ann Kirkpatrick is going to have to change a lot of minds if she hopes to oust John McCain in November, a new poll shows.

The survey done this past week for NBC and the Wall Street Journal by the Marist College Institute for Public Opinion shows the five-term incumbent Republican with a 57-38 percent lead over his challenger. And just 6 percent said they were undecided or wanted someone else.

But the sample of 1,102 adults, including 946 registered voters and 649 likely voters, showed something quite else at the top of the ticket, with Donald Trump and Hillary Clinton in a statistical dead heat. That could put the final results of that race into the hands of the nearly 20 percent who told pollsters they want neither presidential contender or are undecided.

He specifically cited the poll's conclusion that McCain has a 5-point lead among Latino voters. Mitchell said that runs contrary to other surveys which show Hispanics leaning more toward Kirkpatrick. And he said that support for her is only going to increase as McCain continues his support for Trump.

But Latinos appear to be making a distinction between the state's senior senator and the New York billionaire: Just 26 percent said they are currently leaning toward voting for Trump.

Mitchell prefers to cite a survey done by Public Policy Polling released last week which shows his candidate in a 43-43 tie. But a poll done for CNN before McCain crushed Kelli Ward in the Republican primary showed him leading Kirkpatrick at that time by 52 to 39 percent.

What's also working against the challenger is the money factor.

The most recent campaign filings last month showed McCain, who has raised more than $9.8 million this election cycle, still has more than $5 million in the bank. That's more than twice as much as Kirkpatrick reported.

"We are really confident in the position and the program we've put together across the state, both of our media and our grassroots operation to reach out to voters,' he said.

The picture in the presidential race, at least in Arizona, is different.

Among likely voters, the survey shows Trump with 40 percent and Clinton at 38 percent. Libertarian Gary Johnson clocks in with 12 percent of those questions, with 3 percent for Jill Stein of the Green Party, and the other 7 percent undecided or wanting someone else.

Lee Miringoff, director of the Marist College Institute for Public Opinion, said what appears to be driving the race in Arizona and some other states is not that voters particularly like one or the other.

"In fact, the electorate is so turned off by these candidates that about one in five likely voters in these states have a hate-hate view of both of them,' he said in a prepared statement. It was even more pronounced in Arizona, Miringoff said, where 24 percent of likely voters questioned "have a negative impression of both Clinton and Trump.'

For all adults, the margin of error is 3 percentage points. That increases to 3.2 points for registered voters and 3.8 percentage percent for those considered likely voters.