Hunter Bachrach steps up to serve on Jerome Town Council 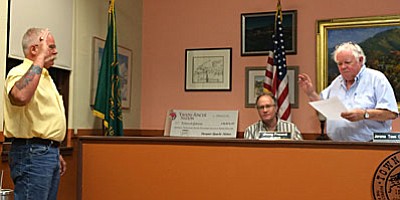 JEROME - Hunter Bachrach was sworn-in as interim council member during a Sept. 13 meeting of Jerome Town Council. The vacancy was created after the Sept. 1 resignation of former Council member Abe Stewart, who relocated out-of-state.

"We only have one more regular meeting between now and then. I was thinking one of the people coming-on to council would like to join us to get their feet wet," said Jerome Mayor Lew Currier.

Currier said top vote-getter non-incumbent council candidate Jay Kinsella "already got his feet wet" from his previous service with council and "was thinking about Hunter."

However, Council member Frank Vander Horst voiced that the first right for refusal should start with Kinsella and Currier agreed. The seat was offered to Kinsella, who nonetheless declined in favor of Bachrach.

"I tend to move toward Hunter and see if he would like to step-in," said Kinsella.

Outgoing Vice Mayor Doug Freund was the lone dissenter in the 3-1 vote approving the action, saying "I think we should table this and solicit applications for next council meeting."

Based on this year's primary election results, a minimum of 50 votes was required to take a seat on Jerome Town Council prior to the Nov. 3 general elections. The three-part mathematical formula determining a candidate's eligibility based upon primary votes was questioned by Currier, who excluded himself from voting on adopting the results.

"I don't understand how they (the county recorder) got it but it's not worth fighting over. I think this is a horrible way to count ballots. I will not vote on this issue because in all honesty I can't figure out the math on this," he said.

After taking his oath of office, Bachrach said, "I welcome the opportunity to participate," and stepped-up to take the seat formerly occupied by Stewart at the council table.