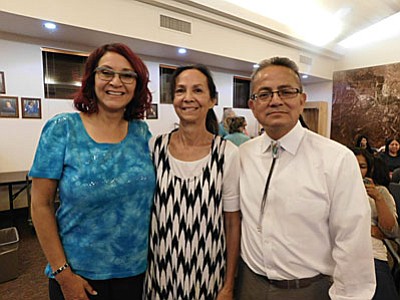 Siera Russell stands with Jane Russell Winiecki and Larry Jackson, Sr. who were selected for their respective seats in the Nation’s government

With a 2:1 margin, Jane Russell Winiecki of Clarkdale won the Tribal Chairperson's position with 387 votes to incumbent Tribal Chairman Thomas Beauty with 174 votes.

For the Chairperson's position, Mrs. Winiecki received overwhelming votes in every voting district including absentee ballots which converted to 69 percent of the votes to Mr. Beauty's 31 percent of the total 561 votes cast for the top position of Tribal Chairperson.

Absentee ballots also were critical factors in the general election as opposed to the primary election.

Siera Russell of Clarkdale won the lone council seat with a total of 233 votes. Ms. Russell received the highest number of votes from Camp Verde, Middle Verde, Tunlii and the absentee ballots.

More expanded news on the candidates who ran for the election and those who won their seats will be announced later today.