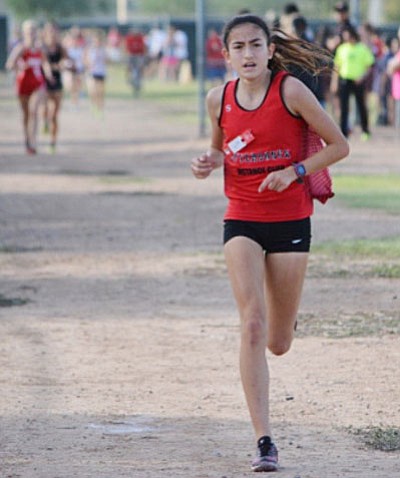 It's all about getting better every single race. Saturday, the Mingus Union cross country team continued to get better.

The boys team finished 16th overall in a 29-team field at the prestigious Four Corners Invitational at Buffalo Park.

Senior Ryan Alexander led the way for the Marauder runners finishing 48th overall with a time of 18:08 over the 5-kilometer course. For the first time, all five of Mingus' scoring running dipped under the 20-minute barrier for the 5K (3.1 miles). Juniors Andrew Salas and Jon Ulibarri clocked in a 18:32 and 18:36, respectively; tough sophomore Cody Wager finished the course in 19:39 and senior Zack Peek finished in 19:56.

The Marauders had a gap between their first and fifth runners of 1-minute, 48 seconds, and the overall team time average was 18:58.

Mingus only ran two runners in the girls varsity race. Junior Hannah DeVore was the top Marauder runner, covering the 5K course in 22:09 for 43rd place. Sophomore Meg Babcock finished in 56th place in 22:27. Mayza Smith of Northland Prep Academy was the individual girls titlist with an 18:39 clocking.

Remaining meets for the Marauder runners include:

Had it not been for a new pair of tight-fitting shoes that rubbed some nasty blisters on her heels and Achilles tendons, Coach Micah Swenson believes she would have run even better.

Despite the ill-fitting shoes, Arellano, a senior at Mingus Union High School, held her own against the collegiate runners, covering the 4-kilometer course in 15-minutes, 13 seconds, which averages out to a 6:07 mile pace.

"The race itself broke out fairly fast," said Coach Swenson. "There was a pack of 7 girls who took it out quickly. Allyson was at the front of the next group, keeping those girls within reach but trying not to over extend too early. There's always a big move in the those groups at some point in the race that really breaks the field and Allyson was poised to take advantage. That's when the shoe issue became evident and problematic."

Swenson says Arellano is likely the best female distance runner to ever come out of the Verde Valley.

Rio Rico senior Allie Schadler continued to make a case for herself as one of the nation's best female high school distance runners by winning the 1-RATED Varsity Girls 3-mile run at the prestigious Woodbridge Cross Country Classic in California over the weekend. Schadler covered the distance in 16-minutes, 26-seconds. Her younger sister, Samantha, a sophomore, was third in the same race in 17:09.

Arizona's Desert Vista girls won the overall team title at Woodbridge with a low score of 49 points, with four of its five scoring runners covering three miles in less than 17 minutes.