Mingus Swim and Dive gets victory over Bradshaw Mountain 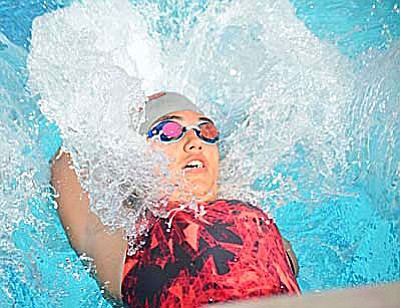 Mingus Union swim coach, Gretchen Wesbrok team is finally a team. As each member swims against their opponents, teammates can be seen and heard yelling support for one another in home meets.

The swim team faced a larger opponent in Bradshaw Mountain and the Marauders more than held their own winning the meet. Garnering points four through fifth place finishes was a key in beating Bradshaw Mountain.

Fourth Victory of the season

Mingus Union won the overall swim against Bradshaw Mountain 282-269 for their third win of the season.

Boy's 100m Backstroke Joseph Calhoon, and Luke Ritter both finished second in the.

Girls 200m freestyle- Skylar Mohr took first place in the, and second in the 500m freestyle.

"I'm very happy with our team, and it was a fantastic meet," coach Wesbrock said, "with every athlete contributing. We went against a team that is much larger than us. Our superstars stepped up, but I'm most impressed with the other kids that we haven't seen as much step up for us. Emma Mohr was huge for us, those fourth and fifth place finishes matter for us.

The Mingus Dive and Swim team take to the water again on Saturday, Sept.24, when they compete at the Brophy/ Xavier Invitational at 9 a.m.