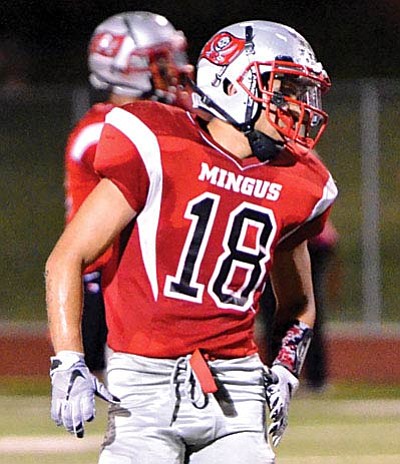 Mingus senior Juan Ruiz leads the team in receiving with six receptions and for 122 yards with an average of 20.3 yards per catch. He has rushed for 226 yards on 36 carries. (VVN/Vyto Starinskas)

Juan Ruiz had a great game against Lee Williams. In that game he intercepted a pass on the first drive of the game after a turnover to stall Lee Williams from scoring.

On offense he scored two TDs to give the Mingus Union Marauders a 35-14 victory over Lee Williams to even their record at 2-2, (1-0, 4A Grand Canyon League).

Ruiz is having an All-State senior season both on offense and defense. He has been a defensive starter since his sophomore year. On offense, he is tied with Tyler Kelly in scoring touchdowns with four. He leads the team in receiving with six receptions and for 122 yards with an average of 20.3 yards per catch. He has rushed for 226 yards on 36 carries.

On the interception, the Marauders were playing red coverage (man-to-man) and he was playing free safety. This interception came right after the Marauders fumbled on the kickoff. Ruiz told his teammates, "We have to get the ball back." Having watched film of the Lee Williams team, Ruiz anticipated a pass play. He reacted to the tipped ball and intercepted the pass.

Ruiz definitely has wheels. His speed is evident on the field as well as the track in the spring. This year, though, he says sophomore Brad Howard is the fastest player on the team.

On his first touchdown, Ruiz scored on a midline option. Quarterback Trey Meyer optioned the defensive end and pitched the ball to Ruiz, who got a block from running back Alejandro Stabreff, as he blocked the corner back to score an 8-yard touchdown.

On the second touchdown, the offensive coordinator called the right play to the wrong side of the field, resulting in a broken play. Ruiz escaped being tackled from behind the line of scrimmage and ran it in from the 5-yard line.

Verde Independent: What does it mean to you to play here as a senior?

RUIZ: I've just seen a lot of traditions here. I know what Mingus is all about. Keeping the tradition going. Here at Mingus we don't have a lot of kids, we have to use everybody. I think the first two games we struggled with that. The seniors realized that it was up to us and when we played Cactus (Cobras) that we had to win.

Verde Independent: Was Cactus the turning point of the season?

RUIZ: Yes. We felt like we do not want to lose any more games, and we want to go undefeated in the region and finish the season strong.

Verde Independent: Do you have any superstitions?

RUIZ: I wear the same game socks for every game. I wash them of course. I have always worn my black camouflage socks even to away games. There is always the Mingus tradition, touch the red dot.

RUIZ: My favorite memory is coming out here every Friday night. There is no better feeling than that.

Verde Independent: Do you plan on going to college next year?

RUIZ: I do. I want to be a paramedic. Anything in the medical field. I like helping people. As far as football next year, I have talked to Arizona Christian College.

Verde Independent: Any advice from your parents?

RUIZ: They told me to always work hard. I just want to make them proud.

RUIZ: I just want to play through the season. I think All-Region, State, and those things will take care of themselves if I just play hard.

RUIZ: I want us to go to state and win.

Verde Independent: What has coach Young meant to you?

RUIZ: Coach Young has been a huge mentor to me. He only wants the best for you. He pushes you as hard as he can to help you reach your full potential.