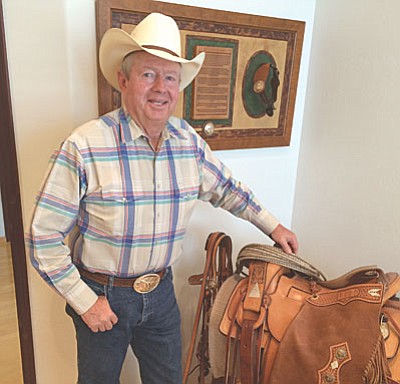 Cottonwood's Andy Groseta is among those to be honored in the 2017 Arizona Farming and Ranching Hall of Fame.

Groseta is being honored for making a substantial contribution to agriculture in the state of Arizona. Joining him in the 2017 Hall of Fame class at the Arizona Farming & Ranching Hall of Fame Dinner at the Wigwam on March 4, 2017, are: Terry & Ramona Button, Gila River Community-Sacaton, Jesse W. Curlee, Scottsdale, James Ohaco, Winslow, Roberta (Bobbi) Stevenson McDermott, Yuma. Being inducted posthumously are: J. Charles Wetzler, Phoenix and Radius A. (Ray) Hudson, Laveen. Rich Levis of Tempe is this year's Special Contributions honoree.

The honorees will be memorialized in Volume Two of the book Arizona Farming and Ranching Hall of Fame, 2013-2017 which will be published in 2017.

Groseta is a third generation rancher from Cottonwood. His family is one of the pioneer mining and ranching families in North Central Arizona. The family ranching operations have included the Pine Creek ranch, a stocker ranch located north of Williams, which was owned and operated by the family from 1980 to 2000, and the W Dart Ranch, a cow-calf operation headquartered in Cottonwood that has been in business in the Verde Valley since 1922.

He was inducted into the Arizona 4-H Hall of Fame in 2013. He and Mary Beth were recognized as the 2004 Arizona Agriculturists of the Year by the Arizona FFA Association. They have received numerous other awards for their work in and for Arizona agriculture and with young people interested in the field of agriculture.