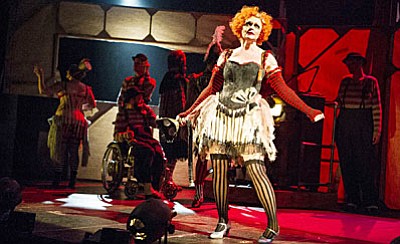 Rory Kinnear is Mack the Knife in a new version of this landmark twentieth-century musical — “The Threepenny Opera” — broadcast live from the stage of the National Theatre. Bertolt Brecht and Kurt Weill’s classic musical theatre piece is adapted by Simon Stephens and directed by Rufus Norris.

The National Theatre of London continues its season with the darkly comic, raucous musical "The Threepenny Opera" showing in Sedona on Sunday, Oct. 2 at 3 p.m.

Rory Kinnear is Mack the Knife in a new version of this landmark twentieth-century musical, broadcast live from the stage of the National Theatre.

Bertolt Brecht and Kurt Weill's classic musical theatre piece is adapted by Simon Stephens (The Curious Incident of the Dog in the Night-Time) and directed by Rufus Norris (Everyman, London Road).

As London's East End scrubs up for the coronation, Mr and Mrs Peachum gear up for a bumper day in the beggary business. Keeping tight control of the city's underground - and their daughter's whereabouts.

With Olivier Award-winner Rory Kinnear (Hamlet, Othello, James Bond) as Macheath, alongside Rosalie Craig (As You Like It, My Family and other Animals) as Polly Peachum and Haydn Gwynne (The Windsors, Drop the Dead Donkey) as Mrs Peachum, this is a production not to be missed!

Contains scenes of a sexual nature, some language and immoral behavior.

Critics are raving about "The Threepenny Opera", and it has garnered 4- and 5-star reviews from every major publication in London:

"It is ridiculous, beautiful, and utterly cynical." - City A.M

"Grimy and tremendously fun." - Time Out

"The Threepenny Opera" will be shown at the Mary D. Fisher Theatre on Sunday, Oct. 2 at 3:00 p.m. Tickets are $15, or $12.50 for Film Festival members. Tickets are available in advance at the Sedona International Film Festival office or by calling 928-282-1177 or online at www.SedonaFilmFestival.org. Both the theatre and film festival office are located at 2030 W. Hwy. 89A, in West Sedona.