Medical effects of hemp-derived CBD to be explored 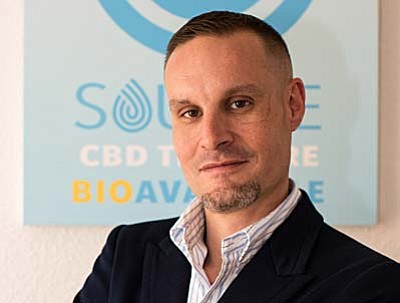 Ian Pedersen: The lecture will touch upon the ever-growing amount of credible studies in the medical community reporting benefits of CBD therapy, from calming nerve pain, headaches and migraines to conditions such as fibromyalgia, arthritis, major inflammation.

COTTONWOOD - The medical benefits of hemp-derivative cannabidiol (CBD) will be explored at Mount Hope Foods on Monday, Oct. 3 from 6:30 p.m. to 7:30 p.m. when Ian Pedersen, CEO and CBD Hemp Researcher at Source CBD, LLC, presents the latest research.

"The lecture will touch upon the ever-growing amount of credible studies in the medical community reporting benefits of CBD therapy, from calming nerve pain, headaches and migraines to conditions such as fibromyalgia, arthritis, major inflammation," said Pedersen. "It has been reported to alleviate or calm serious neuropathic conditions such as epilepsy, Tourette's Syndrome, and Parkinson's. There has also been a great deal of study on the anti-tumor properties of CBD done by the National Institute of Health showing high rates in tumor reduction that we plan to highlight during this discussion."

Unlike the active ingredient tetrahydrocannabinol (THC) in marijuana, CBD from the marijuana-relative hemp is sought for its medicinal - - not psychoactive - - effect. Hemp is used industrially in Asia and Europe to produce products such as biofuel and textiles.

Pedersen has been compiling case studies while working locally with parents who have children suffering from conditions ranging from epilepsy to Tourette's Syndrome.

"The parents have reported a significant improvement in the day-to-day life of their children," Pedersen said. "Similar results are being widely-reported across many different states now that the research is becoming available to the general public."

Camp Verde resident Breanna Moore, for example, reports that her three-and-one-half year-old daughter Kyrsten went from suffering "six, eight, up to 12 seizures a day" using pharmaceutical prescriptions to "only having one or two" using over-the-counter CBD.

After Moore's daughter had maxed-out on high doses of prescription phenobarbital with disappointing results, Moore applied for a medical marijuana treatment card. She said the process was "tough and expensive," and although "it helped as far as comfort goes," she said the results from medical marijuana fell short of Kyrsten's current CBD therapy.

"Recent research reported by the Michal J. Fox Foundation and many other studies are showing benefits related to CBD and how it proactively effects the body. It has been quickly growing as a topic among the natural health community and is now being researched widely," said Pedersen.

"Israel, for instance, has been leading awareness internationally with research dating back over 50 years by Dr. Raphael Mechoulam, who identified and isolated the structure of CBD in 1963," said Pedersen. "Other countries such as Germany have also been a leader in producing legal industrial hemp for over 20 years, along with other regions such as Japan."

"Is marijuana legal? Or is it illegal?"

With headlines about marijuana sending mixed messages over the years, some people find themselves asking: "Is marijuana legal? Or is it illegal?"

The answer to both questions is "Yes."

Without the political will to legalize the cannabis plant (as was done in 1933 by lifting the prohibition on alcohol), government at all levels have chosen to either look the other way, make it available through medical prescription only or allow it through regulation.

Federal law -- as well as Arizona law for non-card holders -- makes illegal "the cultivation, possession, sale, use and transportation of cannabis." In fact, under the 1970 Federal Controlled Substances Act, Schedule I cannabis is considered more dangerous than Schedule II cocaine, stating marijuana has "a high potential for abuse" as well as "no established medical use."

However, bowing to pressure from individual states (as well as its own District of Columbia, which legalized medical marijuana in 1998) the federal government began looking the other way in the 1990's, allowing states to decriminalize the substance as long as they continued to regulate it (and thereby profit from the resulting fees and taxes).

However, Racketeer Influenced and Corrupt Organizations (RICO) seizures remain, where law enforcement can confiscate the property of a person suspected of organized criminal activity (such as drug possession) without being charged or convicted of a crime.

Here in Arizona, voters approved Proposition 203 in 2010, allowing the use and distribution of marijuana for medical purposes.

Come November, Arizona voters will decide whether to legalize the recreational use marijuana, as well, with Proposition 205.

So far, 25 states as well as the District of Columbia have legalized medical marijuana. Two more states -- Florida and Arkansas -- could join the list after the November elections.

Meanwhile, the recreational use of marijuana is legal in Alaska, Colorado, Oregon, Washington and D.C. Five more states (Arizona, California, Maine, Nevada and Massachusetts) have added the legalization of recreational marijuana to its Nov. 8 ballot.

Along with the pros come the cons

Considering that non-card holder possession of marijuana remains as a felony in Arizona, it stands to reason that the arguments against its legalization are many.

Opponents argue that Proposition 205 hands over a monopoly to a select few companies, targets marketing to children, protects those driving under the influence of marijuana and fails to factor-in the societal consequences of drug treatment and high-school dropouts.

In the meantime, Pedersen sees the future of the Verde Valley tied to legal marijuana.

"As we move towards recreational cannabis, we expect many changes in the local economies. We plan to take a major role with some really exciting projects we have in the works," Pedersen said, including "Canna Tourism and cannabis infused tasting dinners for card holders."

Proposition 205 will be up for voter approval Nov. 8. In summary, the measure would allow:

-Adults 21 years of age and older to possess up to one ounce of marijuana and consume marijuana in private.

-Adults to grow up to six marijuana plants in an enclosed, locked space within their residences and possess the marijuana produced by those plants in the location where it was grown.

-No more than 12 total marijuana plants to be grown in a single residence, with property owners and landlords having the right to prohibit marijuana from being grown on their property.

-Localities to zone where and when marijuana businesses are allowed to operate.

-The establishment of the Department of Marijuana Licenses and Control to oversee licensed marijuana retail stores, cultivation facilities, product manufacturing facilities and testing facilities, including a law enforcement unit.

-Requires businesses to test marijuana products and adhere to strict packaging and labeling guidelines.
Contact
Sign up for our e-News Alerts
Most Read
7 days
30 days