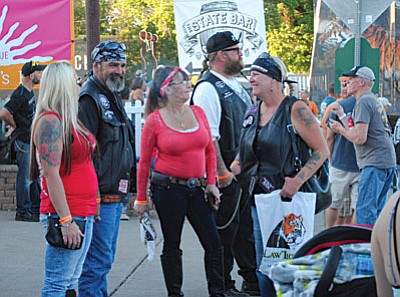 COTTONWOOD - The Thunder Valley Rally committee is set to attend a City Council meeting Oct. 18 to give a post-event presentation.

Parks and Recreation Director Richard Faust said that early counts show that the event over the two-day period saw between 7,500-10,000 visitors. Staff will be getting together with the City Finance Department next week to go over more information as to what revenue streams have brought in verses expenditures they are still getting invoices from.

Faust said this process will probably take an additional three weeks as they try to compile all information and details in order to provide the City Council with final numbers.

The TVR Committee projected (pro-forma) a revenue of $5,000 from the $5 concert bands. Faust said the committee is currently at a count of $14,830 in income, with approximately 2,970 in total attendance. Also new this year were bike bands, bringing in approximately $23,750 for parking fees, said Faust.

All hotels, motels, and resorts throughout the Verde Valley and Sedona were full for the two-day event, said Faust.

 Number of confirmed RV reservations at Verde Valley Fairgrounds: 48 (12 in 2015)
Contact
Sign up for our e-News Alerts
Most Read
7 days
30 days