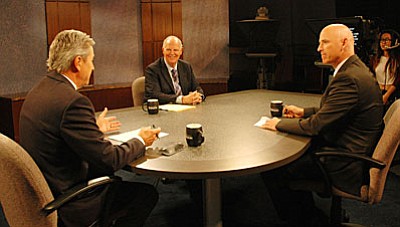 PHOENIX -- The question of when to cut taxes pointed up the sharp division Wednesday between the two contenders to replace Ann Kirkpatrick in Congress.

During a televised debate, Democrat Tom O'Halleran said one of his priorities is "living within our means.' But the former Republican state legislator said it can't all come down to that.

"Investing in our future is a priority for me,' he told host Ted Simons of KAET-TV, the Phoenix PBS affiliate. "I'm not going to just haphazardly cut across the board when we have education issues to deal with, addressing our infrastructure needs, addressing the security of our nation.'

That drew criticism from Pinal County Sheriff Paul Babeu who is the Republican nominee.

"When you hear these key words as 'investing,' that's code for more of the same,' he said. "More of the same is not going to fix our country,' with a $20 trillion national deficit.

Babeu said the key is growing jobs in this country.

"How we do that is we cut taxes,' he said, including collapsing individual income tax brackets and cutting corporate taxes. And Babeu dismissed arguments that lower taxes will mean less money for government.

"If you believe in that concept, I'm not the guy to vote for,' he said.

Babeu countered that there's something else he did not do: switch parties.

O'Halleran was a Republican for the eight years he represented much of the same area in northern Arizona that is part of the sprawling Congressional District 1. He was ousted when Steve Pierce defeated him in the 2008 Republican primary for state Senate.

Two years ago he registered as an independent in an unsuccessful bid to regain his state Senate seat. He now is a Democrat.

O'Halleran brushed aside a question from Simons that his shifting political labels show the lack of commitment to any set of ideals.

"It's the same ideals I worked on before,' he said. And O'Halleran said he consistently represented what he said was the will of the residents of his district even if it meant disagreeing with the Republican Party or legislative GOP leadership.

In 2004 House Speaker Jake Flake stripped O'Halleran of his chairmanship of the Committee on Natural Resources and Agriculture because he had worked the prior year to get more money for Child Protective Services, money the GOP leaders did not want.

"So the idea that I'm not going to fight for the citizens of Congressional District 1 is just ridiculous,' he said.

Babeu, however, said if residents really thought he was representing their interests they would not have turned him out of office in 2008. The sheriff said at least part of the reason for that was the spending measures that O'Halleran supported.

O'Halleran was unapologetic about how much the state budget increased while he was in office, a figure Babeu put at 64 percent.

"We had almost a million people enter this state while I was in the legislature,' O'Halleran said. "We had a 27 percent inflation factor.'

And he defended his votes to put more money into K-12 education, community colleges and universities.

Babeu insisted that more spending is never the answer.

The sheriff said that his budget is now 8 percent less now than it was two years ago even as the county has grown rapidly. He said the key is living within the money that's available.

After the debate, Babeu continued to defend his fiscal philosophy.

"What works is reducing taxes and cutting regulation,' he said. "This is something that is proven with a free market capitalist society (that) works.'

"There are times where tax cuts are counterproductive to the ability of us to move forward as a nation, to make sure we have our schools in order, that our children have opportunity, that our roads are in place, that border security is in place, that our military's strong,' he said. And O'Halleran said history has shown that simply cutting taxes does not stimulate the economy.

During the half-hour televised debate, both said they support the Second Amendment right to bear arms. But O'Halleran, a former Chicago police officer, said there have to be reasonable limits on that to keep weapons out of the hands of terrorists and felons.

Babeu said he disagrees and instead sides with the National Rifle Association, which endorsed him, which has taken the position against a blanket ban on weapons purchase by those on terrorist or no-fly lists.