Unconditional love a way of life for Village 'Bird Lady' 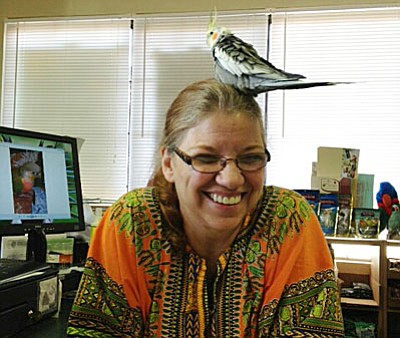 Friends spoke about "The Bird Lady" in warm tones and loving words: she was sweet, kind, generous, knew how to care for sick and wounded birds, did the same for people and gave generously to her community.

When I finally met Roxanne Genaro, the owner of Feathers and Fur Pet Supply & Grooming in Castle Rock Plaza, I understood why people love her so much. Roxanne is Mom. She nurtures everyone and loves you unconditionally.

She says it every time you part ways, "I love you."

"It's not really a pet store," said Roxanne, smiling, eyes twinkling, "it's a meeting place. A lot of people come in just for hugs! We give hugs and make people feel better; for some reason it's a healing place. We make magic every single day."

Roxanne grew up in a broken home in Indianapolis, abused by an alcoholic mother. Her Grandpa, a barnstormer pilot, did aerial photography of the Indy 500 races. At 16 she met and moved in with her inventor father, helping sell his products and saved all her money.

At 17, she left to live on her own. After a brief marriage her son, Shawn, was born. She supported Shawn by working weekdays and singing in a band on weekends.

Moving to Florida, she remarried and opened her own ceramics shop that also held classes including a therapy class for high-risk kids. She had two more sons, one who died in utero at 8 months and the other who now lives in Florida with his own son. Her business was purchased so the family packed up and moved to St. Croix, where she ran things for the new owners. At one point a kiln lid fell on her, crushing her back. The damage and pain was severe and persists to this day.

St. Croix experienced poverty with tropical storms that devastated the island. Roxanne said, "Rather than worry, you learn to make do with what you have." The business was handed back to her and shortly after, she stood on a dock watching a hurricane rip the roof off and gut the building, with heavy kilns sucked into the air and flying away!

Roxanne later suffered a stroke and moved to Indianapolis to recover. She then discovered her husband and son, still in St. Croix, were addicted to heroin. "A friend told me, 'You can only save one of them' so I chose my son."

He moved back to Indiana and, with much help and support, got clean. Her son gave Roxanne a beautiful granddaughter, Abby, who she adores and Roxanne finally had that back surgery she'd needed for years.

But in 2002, Shawn was drawn back to heroin through a new "friend" and died of an overdose that same year. Roxanne was shattered and moved to Sedona 10 years ago. Running her store is her passion now (but barely paying her bills due to her generosity). Although in pain every day from her losses and from her back needing another surgery, she smiles again, "It's all about love and that's what makes all things possible."

Jim is a pastor, husband, father, lover of people friend, neighbor, counselor, teacher, book collector and jack of all trades. Meet him here each month to become acquainted with yet another Village resident.