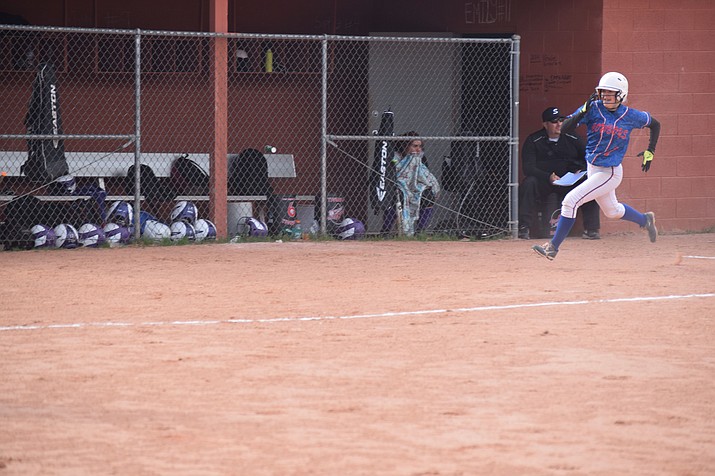 The No. 4 Lady Cowboys beat the Scorpions 19-0 on Friday afternoon to improve to 6-1 in power points games and 2-0 in the Central Region.

“All week was good,” Henry Smith said. “We started off playing a game Tuesday and we had a really good week of practice, probably our best week of practice we’ve ever had, so we were excited to see what we could (Friday) off of Natalie, who’s a good pitcher.”

Camp Verde jumped out to a 6-0 lead in the first inning and then kept piling on more runs.

“I think it went pretty well, we played how we should play, better than we have been,” said junior Tyra Smith.

While the Lady Cowboys lit up the scoreboard, well if it was on, Henry Smith also praised their defense and pitching, like Tiauna Day and their three freshmen pitchers: Jacy Finley, Jordyn Cowsert and Hailey Moore.

While it was a rivalry win, Henry Smith said they didn’t know that many of the other Scorpions players, besides Natalie Monge and her sophomore sister Hailey Monge.

“I’m pretty sure she’s doing well, she’s a good ball player,” Henry Smith said. “I don’t do much stat tracking but I’m confident. She’s a solid ball player, she’s always willing to do whatever it takes to compete.”

“She’s always been pretty good, so we just had to focus on how we need to bat well,” Tyra Smith said.

Sedona Red Rock came in ranked No. 31 and with a 1-2 region record, sit in fourth place.

Camp Verde dropped a spot in the rankings, to fourth. They beat No. 3 Santa Cruz Valley 17-6 but that was in a tournament, results that aren’t factored into the rankings.

Since tinkering with their line up at the Grace Lee Haught Memorial, the Lady Cowboys have been dominant.

Tyra Smith said they’re playing as they should have in the beginning of the season.

“I think we’re doing really well,” Tyra Smith said. “We’re working better together than we were in the beginning and tournaments and stuff, we’re getting a lot better.”

Camp Verde’s next game is on Tuesday when they host No. 16 Paradise Honors at 3:45 p.m.

Henry Smith that while Camp Verde is doing well right now, it is “neat” that they still have room to grow.

“It’s go time now and they’re excited,” Henry Smith said. “We put a lot of thought early in the season, I think we were over thinking and somewhat over playing. So now we’re pretty much over that and they know what they need to do and they’re aware of their jobs and they’re willing to execute those certain tasks that we’re giving them.”