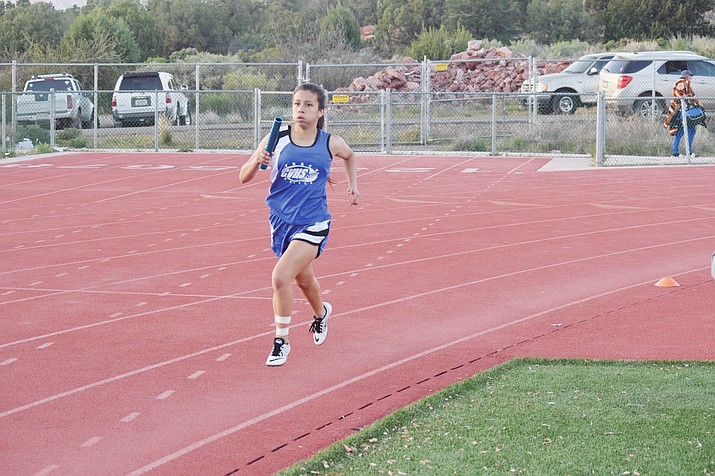 Camp Verde sophomore Eliana Paniagua runs in the 4x400 meter relay on Saturday at the Red Rock Invitational. Paniagua bested her personal record by 14 seconds in the 1600 meters earlier in the day at the meet. (VVN/James Kelley)

The Lady Cowboys set a number of personal records at the meet at Sedona Red Rock on Saturday, led by sophomore Eliana Paniagua, who was 12th in the Frosh/Soph 1600 in 6:22.64, a new personal best.

“We’ve had some season bests in some cases like Ellie Paniagua in the 1600 by about 14 seconds, which over a four lap race is a really nice jump down,” said Camp Verde track and field head coach Mike O’Callaghan. “She had a good relay leg in the 4 x 4, she ran a good leg there. On the whole it’s been a good day.”

The PRs come despite the injuries and illness spread through the team.

“A couple of them are getting some leg and shin problems, a little bit of that sometimes I believe is just because we’ve got a hard track to run on, it’s dirt, but it’s a real hard, packed dirt and I think that sometimes causes some issues,” O’Callaghan said. “When that happens, we just go out, hit the field and go run on the grass and give them a chance to heal up. A couple of them are sick, we had one actually go home with her mom, that was sick. So something seems to be going around a bit and this is not what you want to see partway through the season.”

Campbell-Kilburn is ranked No. 7 in the discus in the state with a mark of 97-6.

While the weather appeared frightful, O’Callaghan said it was a good day for a meet.

“This morning it was fairly overcast, cold but once kinda the clouds burned out and the sun came out, it was really a pretty gorgeous day,” O’Callaghan said. “The wind was not bad, so yeah, it was just a nice day to be out.”

Up next for the Lady Cowboys is the Westside Invitational on Saturday in Deer Valley. Their next meet in Verde Valley is the Sedona Invitational on April 18 at Sedona Red Rock.