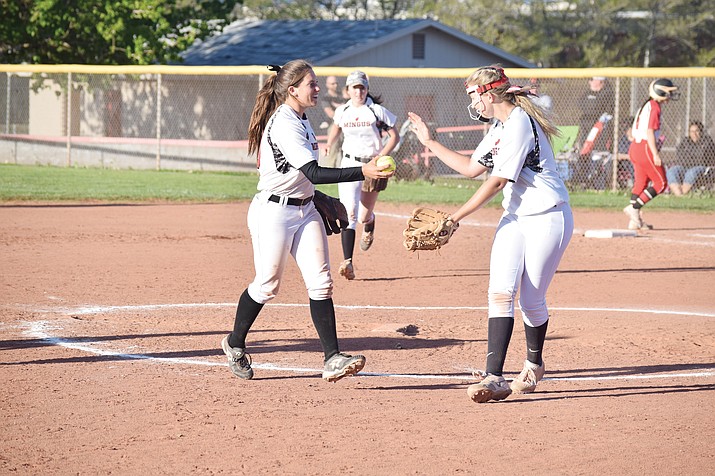 Mingus Union junior Nikki Zielinski and senior Krista Earl celebrate their 3-1 win over Coconino on Tuesday at home. The win moved the No. 10 Lady Marauders into first place in the region. (James Kelley/VVN)

Mingus Union softball came from behind to beat Coconino at home on Tuesday and get a leg up in the race for the region crown.

“I’m just happy,” said Mingus Union head coach John Brown. “I think we squeaked out a win there against a really good team, a win that we had to have, the kids battled through it and they came around and found a way with two outs, in an inning where we probably could have walked away from it and lost one to nothing, so it’s a big game to win.”

After Coconino (4-2 Grand Canyon) scored in the fourth inning, Mingus Union rallied in the sixth. Sophomore Ashley McCracken tied the game by drawing a bases loaded walk and then junior Bailey Brown drove in the game winning runs.

Brown said she was thinking all about her team and their motto when she came up to bat.

The Lady Marauders’ rally came with two outs, like another phrase they have.

“Our number nine batter is the one that pushed the runs in and traditionally you sub for her or you just do something there and hope for something different, but I just had a feeling that she was going to hit the ball and she did,” Brown said. “We have a phrase called ‘a two-out nightmare’ and we love to pour it on a team when we have two outs, because it seems like the other teams lighten up and we just turn it up and it seems to work.”

Mingus Union was in the game because they the held the Panthers early on, stranding five Coconino runners on base in the first two innings.

“Oh my gosh, it’s awesome, especially against Coconino, which is a region game, it was super important for us to get it,” said senior pitcher Krista Earl about the win. “It was really awesome to pull it out in the last inning. It was amazing.”

Earl pitched a complete game, giving up four hits, three walks and no earned runs, while striking out eight.

Brown said he wasn’t that worried early on.

“I was a little nervous, but early in the game, that stuff doesn’t bother me too much because I feel like we got time to recover from it if it happens,” Brown said. “So Krista’s a veteran pitcher, she’s been pitching for me since she was 8 years old, I got nothing but faith in that kid, so she finds a way to get outs in those situations.”

Mingus Union bounced back after losing 4-1 to Greenway on Monday. However, the Lady Marauders have won four of their last five games.

Not only did the win move Mingus Union into the top 10 in the rankings, it also moved them into first place in the region and secured at least a regular season split with Coconino.

“I’m very excited, it was a great win, it’s going to put us in a good place for our region, so overall it was really good,” Brown said.

After their win on Tuesday, the Cactus game looks like a playoff preview.

“That was amazing, my team pulled through, clutch, it was awesome, I’m super proud of them,” Earl said.