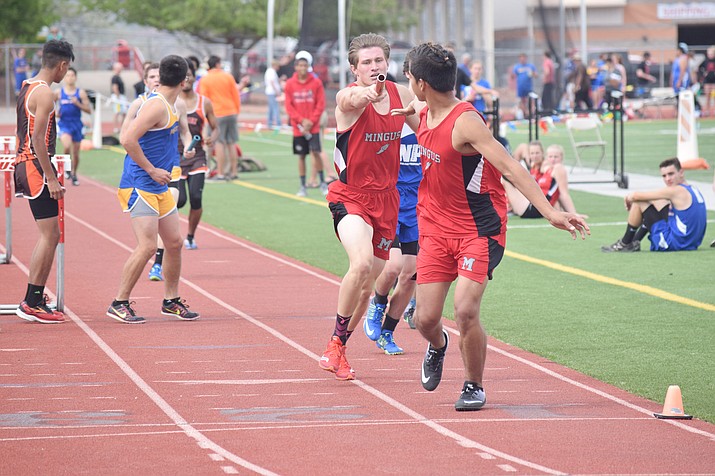 Mingus Union sophomore Cody Wager hands the baton off to senior Alberto Silvain in the 4x800 meter relay at the Mingus Invitational on Friday at home. (VVN/James Kelley)

COTTONWOOD – Mingus Union boys track and field impressed their coach in a variety of ways in their only home meet of the season.

On Friday the Marauders hosted the Mingus Invitational. Full results were not available at press time.

DeVore was also impressed with the 4x100 and 4x400 relay teams at the meet, for different reasons, as well as junior Jonathan Jung and sophomore Kendrew Streck.

“Our boys 4x4 performed well and the boys 4x1 actually did a good job,” DeVore said. “That was the first time that they got the stick around the track without being disqualified, so that was kind of plus for them. Jonathan Jung ran a really good 100, that was a PR for him and Kendrew Streck threw well, both shot and discus.”

Overall this season DeVore has been impressed with Jung.

“Again, I thought Jonathan Jung performed well (Friday) and he also ran a really good 400 race for us,” DeVore said. “So I’ve been really impressed with how’s been stepping up midseason.”

Unlike the girls side, the boys team hasn’t had to deal with many major injuries.

“We don’t have any major health stuff going on right now,” DeVore said. “As far as the relays go, it’s the right combination and trying to figure out what’s the best combination and fastest guys are going to be, so it’s just a work in progress.”