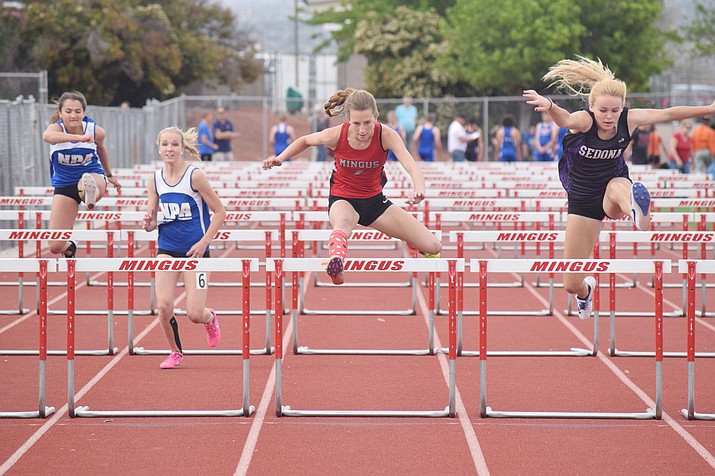 Mingus Union junior Hannah DeVore (center) competes in the 100 meter hurdles at the Mingus Invitational on Friday at home. Head coach Yancey DeVore said his daughter is “starting to get back into the groove” after starting the season injured. (VVN/James Kelley)

COTTONWOOD – Mingus Union girls track and field continued their recovery from injuries to prominent athletes on Friday but were missing another.

The Marauders hosted the Mingus Invitational on Friday and it saw the return of senior Auli Hanks. Since the Small School Invite on March 4, she had only competed in the Nike Chandler Rotary and then only on the 4x100 relay.

Full results for the Mingus invite were not available at press time, but Mingus Union track and field head coach Yancey DeVore was impressed with the girls.

“The girls did well, we had some strong performances,” Yancey DeVore said.

“It was nice to see Auli Hanks actually out here competing, she was doing pretty good. She hadn’t been in a meet for some time because of an injury. Hopefully we can get her up and running and healthy and all that other stuff.”

Key contributors Hanks, junior Hannah DeVore and senior Holly Johnson have been limited this season due to injuries.

“So we’re just really proud of what they were able to do in the sprints. They really did a good job (Friday).”

“So that was really fun to watch,” Yancey DeVore said.

Yancey DeVore said he has been really impressed with Babcock, Meacham and senior Katelyn Prouty this season and said Hannah DeVore is “starting to get back into the groove.”

While Hanks and Hannah DeVore have been able to return or even start to return to form, Johnson didn’t run at the meet.

“We’re getting there but this week Holly wasn’t able to run, so we just haven’t been clicking on all cylinders for the girls,” Yancey DeVore said. “Hopefully we’ll get there, we just have a handful of meets left and hopefully we can get there where everybody’s running.”