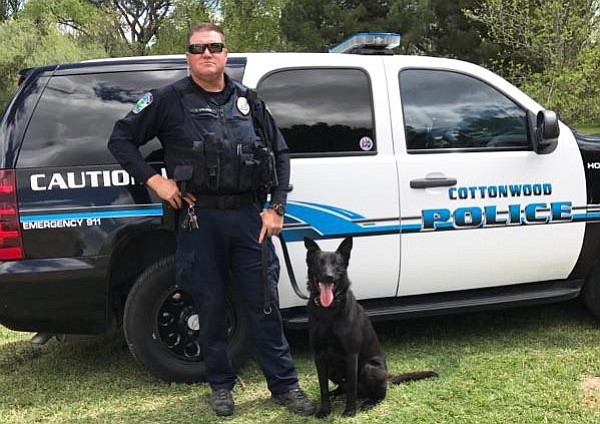 The K9 is a twenty-month-old Dutch Shepard Malanois mix from Holland.

According to a Cottonwood Police Department news release, Kratos’ training consisted of “KNPV Sport Dog.” KNPV is not a sport, but is a European organization which certifies dogs for police, military, and other governmental services. It specializes in the single purpose of patrol based policing in Europe.”

Kratos will need to be taught the patrol methods from the industry standards in the State of Arizona, which is slightly different than KNPV, said police. He also will be dual certified in patrol and narcotics detection.

“Kratos will be socialized with our community so he is not only used for police functions but will conduct demos, and still be friendly enough to be pet by the public,” said police.

The process to train Kratos to the level of NPCA (National Police Canine Association) certification will take approximately 2-4 months.

After the certification, he will be working the road with his handler, Officer Cory Shilling. His current K9, Jax, will cover the gap until Kratos is ready.

“Jax will enjoy a retired life of living in the house, and get spoiled by the Shilling family,” stated the release.

The retirement of Jax and purchase of Kratos was made possible with the monetary aid from the Arizona Community Foundation grant and the National Police Dog Foundation grant, stated the release. Through the assistance of Olsen’s Grain, the public has made several donations to the law enforcement Salute to Heroes foundation, a 501C3. The public’s generous donations aid in not only the purchase of Kratos, but for his veterinary costs, equipment, and housing, said police.