Unclaimed bikes in police lot will go to needy 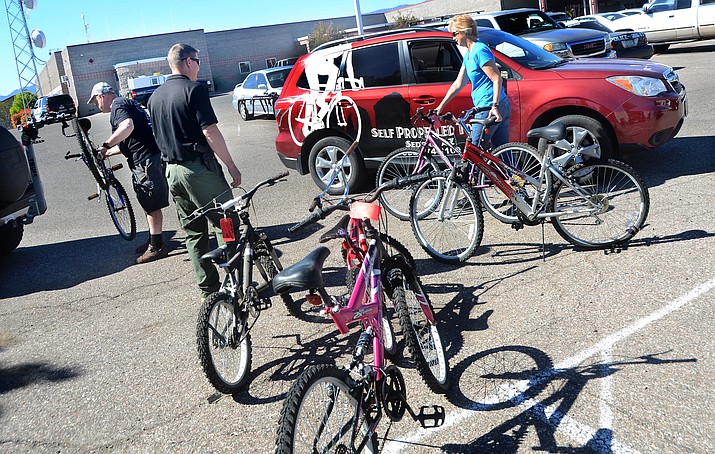 COTTONWOOD -- Every year, confiscated and lost bikes pile up in the compound lot at the Cottonwood Police Department.

They are rejected by their owners because the owners of the bikes don’t want them, other owners can’t be found and others are in jail.

Now, police, a local woman and a local bicycle advisory committee are teaming up to get those bikes to the needy.

“These bikes are either found property, or perhaps safe keeping for someone ended up being arrested,” explained Cottonwood Police Department Commander Gary Eisenga. “If they never return to their bike, then we can do things like donations.”

People have 30 days to claim their bikes after the police department impounds them, Eisenga said.

On Thursday, Heather Parris of her organization “Chain Reaction,” was at the police department combing through the bikes. Some were in good shape and some needed a lot of work,

Parris said she got together with the police department after coordinating with the Bicycle Advisory Committee in Cottonwood, which the Cottonwood Parks & Recreation Department is part of.

Parris said she had four men from the Verde Valley Cyclist Coalition who have volunteered to fix the bicycles. The bikes will be donated to Catholic Charities bicycles for vets, she said

“There’s a need in Cottonwood with children whose parents can’t afford bikes for them,” Parris said. “I want to address that issue as well,” she added.

Parris is the owner of Self Propelled Tours in Sedona and last January she started her bicycle-donation mission with a call to friends and customers for used bikes to go to Angie’s House in Cottonwood.

Angie’s House, a transitional home and homeless shelter, received about seven used bikes, some helmets from Absolute Bikes Sedona and Zoomers Bike and Gear in Cottonwood.

So her new idea is to distribute as many of the 30 bikes in the Cottonwood Police lot to needy people that can be fixed and used, she said.

It’s great to have someone like Heather come in and go through the bikes and maybe even strip parts from one bike and use them on another, Eisenga said.

Parris said she was taking seven bikes on Thursday and three will be available soon. But she as the police department gets more bikes, this will become a revolving thing.”