Life in the Slow Lane: "This and That" 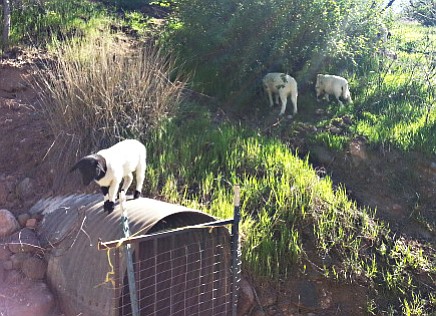 What a week! I've done nothing but herd sheep, dogs, a pig, chicks and the occasional cat. And I've done it with a strained ligament in my foot. Ouch. I didn't do anything in particular to get that strain. It's the fault of my shoes. My feet are unusually narrow and it's very difficult for me to find footwear. I suspect I've aggravated it because right now I'm walking the length of a football field--back and forth--about 10 times a day, what with feeding the little guy and doing the above mentioned herding. Let me say that writing this post is a welcome rest from walking.

That's Peanut on the pipe while Mari and Mekko are feasting on a hackberry.

First, a Peanut update. He's growing like a weed! Although he's likely to always be on the small side, he's only a little smaller than his siblings these days. He and Mekko, his brother, are best buds. Because of that, Mekko has become very friendly with me while Mari continues to keep her distance. After Peanut finishes his bottle, Mekko comes over to examine yet again this strange contraption. And, just like all babies used to a more natural milk delivery system, he makes a lip-curling sneer when confronting the plastic nipple. Then he offers his head in a plea for me to scratch his ears. Then the two little boys go dancing off across the hillside, playing headbutts and leaps.

These last few nights Peanut and Mekko have been reluctant to part. That is, until darkness falls and Peanut gets nervous. I can hear his calls from the house. "MOM! Where are you? It's scary out here!" Each time, Mekko has tried to follow his little brother as I open the gate for Peanut. For the record: having one lamb using my house as a bathroom is enough.

Poor Bear! As I mentioned above, I moved my sheep onto my rocky, thin-soiled hillside a few weeks ago. Pretty much nothing but mesquite, hackberries, judas thorn and other nasty desert vegetation grows on that hillside, but this year's rains have miraculously encouraged a ton of grass out of the poor dirt. I'll be dinged if I'm willing to let good grass go to waste. Although the area--the part of my property farthest from the house--is fenced, it's much more exposed than the rest of my property. The minute I moved the sheep up there the coyotes noticed. This means Bear needs do his job. No more of this laying his head on the porch railing and barking at things without opening his eyes. I expect him to earn his pound of raw meat a day by working...all night long.

I tried confining Moosie on the hillside with him. Dope slap. There's no penning that dog. Moosie has found every possible hole (and I've noted them so I can fix them). He's always in his dog house in the morning. Well, if he knows how to get out of the fence then he also knows how to get into the fence. If Bear needs him, Moosie will show up.

I'm hoping we get one more good rainstorm before the heat sets in. This would give my grass a last growth spurt and the sheep a little longer in that wild area. They've been doing a great job carving out pathways and mowing down everything except the dang foxtails. (I've got to get up there with the weedwhacker. Right. In my spare time.) They've also had at the poison ivy. Who knew that sheep could eat poison ivy without consequences? Or at least consequences that I can see. Of course, Peanut is right in there with them, munching away. Unfortunately, this means his belly gets covered in the plant oils. The last two times I've had to carry him up the stairs--he just can't quite grasp the concept of climbing them--I've ended up with a poison ivy rash on my forearms.

Comfrey--so glad I planted it!

Thank God for comfrey! I planted it just because I wanted to see what it looked like, and how well it grew. Now, I'm dependent on those somewhat prickly leaves to ease the rash. I pick a few leaves, crush them, then bind them to my arms with sticks-to-itself medical wrapping tape. Aaah! Wonderful!

And onto Miss Piggy. Boy, oh boy, do I have a pregnant pig. Her belly now droops significantly and her nipples are distending. Everything she does at the moment is done in slow motion. She gets up to eat breakfasts, retreats to her straw pile where she remains until she's pink from the sun. Then, depending on the day, she either makes her way to the wallow in the orchard that I keep moist for her or into the half-empty pond where she has a nice mud bath. Then it's time to sleep in the brooder coop. There, she buries herself in straw again and snoozes the day away, awakening only long enough to eat the egg that my sole Rhode Island Red hen likes to lay right next to her. Talk about convenient!

Five of my turkey hens are down on nests now, leaving eight still laying. As for the toms, I've managed to negotiate a detente. Like any negotiated settlement, it only works because of a physical barrier. All of the Toms are too big to squeeze through the gaps in the pipe gate that prevents pigs and sheep from entering the turkey coop door during the day. That makes it easy for me to rotate them. Tom is allowed out from dawn until noon, after which I carry him to the turkey coop, close the pipe gate and free his sons. The two boys can then enjoy the adoration of their girls until dusk. A couple of days ago, I locked Tom into the orchard and let his boys out, just to see if anything had changed. It hadn't. The three of them spent hours safely threatening each other through the chain link. Well, at least it kept them busy. What's really surprising to me is that neither of the young toms have come after me now that Tom doesn't control them. I've always said that Tom is passing on his gentle nature and apparently I was speaking the truth.

Last night was the first night that ALL twenty-four of my new chicks used the ramp to enter their new coop at the same time! Finally! It was a pain in the foot herding them 'round and 'round that coop, trying to convince them they needed to be inside before sundown so the Mooserator couldn't get them. I was please to see that more than half were perched on the roosts this morning when I came to open the coop. They're growing up.

And my last note for this post. I have lilacs! My two bushes are still tiny, one more than the other because Derek accidentally weedwhacked it, but both of them have burst into bloom. I happen to love the smell and look of lilacs.

Yep, a good week despite the hobbling. Ah well, there'll be plenty of time to sit when I retire. Yeah, right. Like that's ever happening.