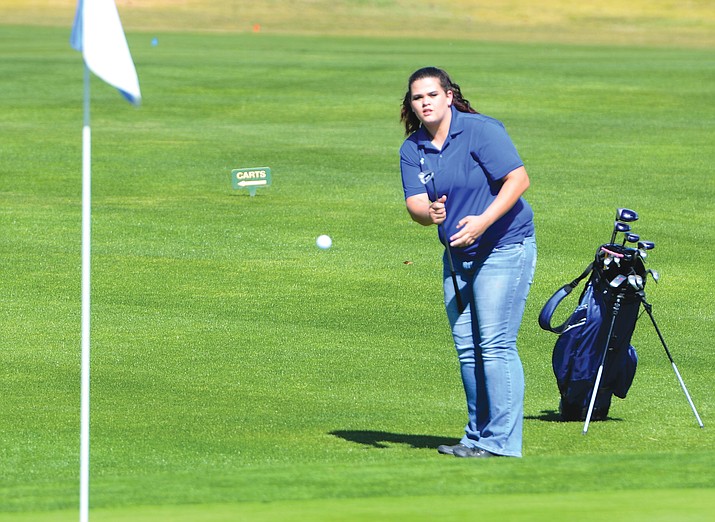 Camp Verde senior Marisa Presmyk hits the ball onto the green on the first hole at Verde Santa Fe Golf Course on Monday in the match against Chino Valley. Presmyk won the No. 2 match by two strokes, shooting a 61 on the nine holes.(VVN/Vyto Starinskas) 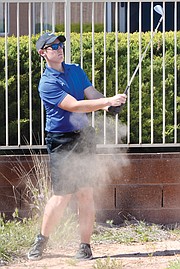 Five golfers play matches and the top four scores count. The rookie Peterson’s score was one that counted, impressing Fuller.

“We actually used Kendall’s score in the match, so it was a really cool thing,” Fuller said.

Chino Valley assistant coach Wade Krug filled in for their head coach Jerry Behm. Krug said it was a good match for the Cougars because they’re so young.

“We played really well for what we’ve got and who we had (Monday),” Krug said. “We played a really good match.”

While Chino Valley won four of the five matches, none were by more than three stokes.

Chino Valley senior C.J. Knight shot the lowest score on the day, 51, and edged Camp Verde junior Nicholas Daniels by a stroke in the No. 1 match.

“Our number one, C.J. Knight, he had a really good match (Monday),” Krug said. “He just came out and played a really good, solid match for himself.”

“I haven’t played this course in a while so it was pretty interesting to play it,” Rabbe-Mazza said.

Cougar junior Wyatt Dodds defeated one of Camp Verde’s veterans Will Webster 59-61 in the No. 3 match.

As they’re both young and Chino Valley is ranked No. 47 in Division III and Camp Verde No. 48, teams seemed like mirror images. Before the match the coaches joked that the CVHS in blue would win as both teams wore royal blue polos.

Chino Valley is in fifth in Section V and Camp Verde sixth. No. 5 Northland Prep and No. 9 Sedona Red Rock are the front runners to win the section’s automatic bid to the state tournament in May.

The 15-team tournament features eight at large teams based on the rankings and the top 15 individual players who are not attached qualify.

Even though it’s a rebuilding year for the Cowboys, Fuller said he likes how the season has gone.

“It’s gone very well,” Fuller said. “As I said earlier on in the season, it’s a rebuilding year and that’s exactly what we’re doing and the kids are improving every week and that’s all I can ask for and I think they’re doing a great job.”

“I think that they would be considered to be our rival,” Fuller said. “We’ve had some other close matches as well. We’ve beat a couple teams this year, so I wouldn’t say they’re all that close, no, but we’ve had some close matches.”