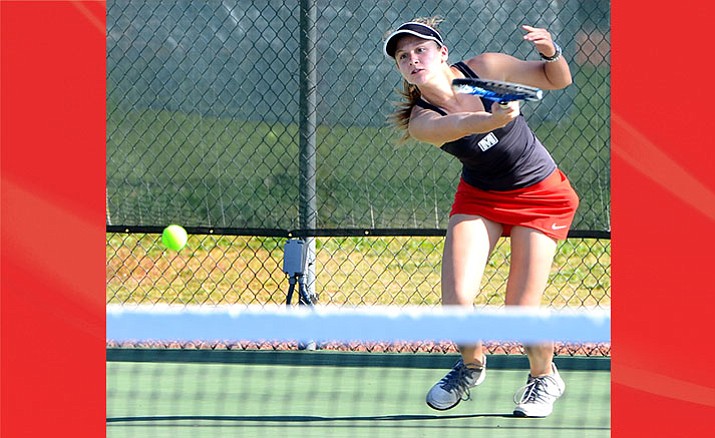 It was a tough week for Mingus Union girls tennis, on the court and off, where they were writing thesis statements and working on bibliographies on the bus.

“We didn’t have the outcome that we wish we could have had, we lost 5-4,” said Mingus Union head coach Andrea Meyer. “We knew that it would be close and we knew that Coco had a player or two at the top who were very proficient, highly skilled, tournament players and they lived up to their billing.”

“(Wednesday) we played Cactus Shadows and Tuesday we played Prescott and they’re some of the top teams in the division,” Meyer said. “So it was a hard week, the girls had a pretty stiff academic week as well, they’re preparing for their AP exams and writing research papers and so we were writing thesis sentences and doing bibliography cards on the bus (laughs) and that’s really important that a coach and a team respects the academics and so they were a little tired (Thursday) but that’s the way the school year goes and I’m very proud of their academics as well. So I’m just again, happy with the way they played.”

The three loses probably eliminated Mingus Union from contention for the Division II state tournament, of which the top 16 teams are invited, but the Lady Marauders were excited to see Mingus Union former No. 1 Olivia Galluzzi come to see the match.

“So we’re probably not going to team state but the best thing is our former number one Olivia Galluzzi showed up to the match with her mom and the girls just ran to her and embraced her and that’s why you coach tennis and that’s why you have tennis teams,” Meyer said. That kind of camaraderie is a special thing and that’s what the kids remember. They won’t remember losing to Coconino, next month they may not remember that (laughs) but they’ll remember that they hung together as a team, that Olivia came and watched them.”

Meyer said she was proud of how Mingus played against Coconino, especially with senior Phoebe Chilton and junior Talon Whiteley at the top.

“Phoebe at number two and Talon at number one did their best and I’m proud of the games that they played,” Meyer said. What they tried to do was mix up the pace, so that they weren’t just firing back in a cannon ball shoot you know (laughs) with trying to outmatch the pace, so they tried to mix it up, hit some slices, drive the players to the corners but Talon actually did out gun that girl on a couple of points late in the match when it was pretty risky and so you’ll be seeing more good things from Talon next year as well, she’s a junior.”

Mingus Union won two doubles matches against Coconino and after winning the No. 3 and No. 6 matches; it came down to junior Pei-Wen Yang’s at No. 4.

“Pei-Wen put up a good fight, she’s been having trouble with her left wrist, which is her hitting arm, and Pei-Wen got close but the other girl got better too as the match went on,” Meyer said. “So no reasonable coach would say that she were disappointed, you know? This is a team that has been consistent and heads up all season long and they did not disappoint me.”

Mingus Union likely closes out the team portion of the season on Tuesday at 3:30 p.m. at No. 19 Sunrise Mountain (7-5, 5-1 Section IV). The match was originally scheduled for Feb. 28 at Mingus Union but was postponed due to rain.

The boys tennis match with Sunrise Mountain was cancelled.

“Sunrise Mountain lost their athletic director and they were sort of in chaos and they also have Monday off so because of that spring holiday the best we could get as far as a rematch was Tuesday, which is the last day of the competitive regular season,” Meyer said.

The match is a big one as it could also affect the seedings for the singles and doubles state tournaments. Chilton will be playing in the singles tournament and Whiteley and junior Emma Williams in the doubles.

The singles and doubles state tournaments begin on Friday and will be at Gene Autry Sports Complex in Mesa. The first three rounds are on Friday and Saturday and the last three the next weekend.

“Overall I’m quite pleased as I have been all season with the girls’ play,” Meyer said. “We’ve never really had a bad match from any girl on the team and that’s remarkable.”