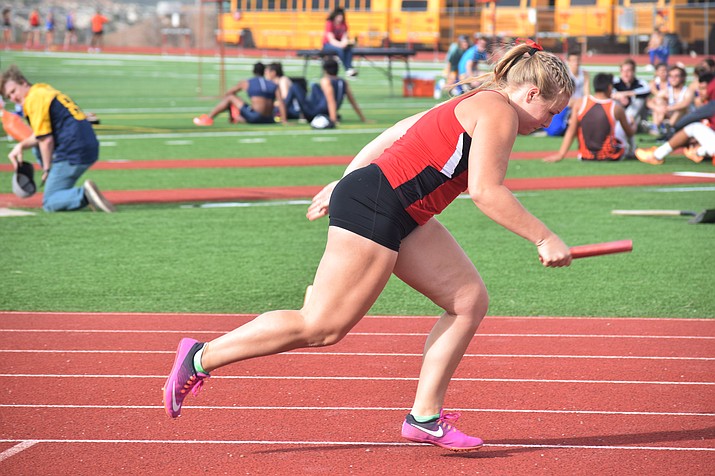 In the girls division, Mingus (75 points) was fourth and Camp Verde ninth (29) in the competition won by Cactus High School with 101 points.

Mingus’ lone individual champion Thursday was sophomore Kendrew Streck, who had a lifetime best performance in the shot put, winning the event with an impressive throw of 45-feet, 3 inches, which was four feet better than his nearest competitor. He also finished fifth in the discus with the throw of 117-8.

Mingus also got big points from junior Jonathan Jung, who was second in the high jump at 5-10 and rode an over-the-limit wind-aided 11.45-second clocking in the 100-meter dash for fourth place.

Mingus was also especially strong in the 400-meter dash where senior Ryan Alexander and junior Jon Ulibarri finished second and third, both with personal records of 53.88 and 54.79 seconds.

Camp Verde sophomore Christopher Holdgrafer finished fourth in the triple jump at the Wrangler Athletic Boosters Invitational. He has qualified for state in the 110 meter hurdles. (VVN/James Kelley)

Junior Nate Schultz carried the load for Camp Verde by winning both the long jump at 19-feet, 10.5 inches and the triple jump with a 41-8 effort. Teammate Christopher Holdgrafer, a sophomore, was fourth in the triple jump at 39-2.

As has been the case since mid-season, Camp Verde is showing solid strength in the hurdle events. Schultz and Holdgrafer were sixth and eighth in the 300-meter hurdles with respective times of 44.29 seconds and 46.18. Holdgrafer added fourth-place points in the 110-meter high hurdles with a 16.88-second clocking.

Sophomore Joseph Jones was a pleasant surprise for the Cowboys with a second-place finish in the 3200-meter run. Last week, Jones broke 5-minutes for the first time ever in the Westside Invitational with a 4:56 clocking. Thursday, he chopped almost three-minutes off his previous best performance over 3200 meters with a 10:53 clocking.

After a slow start this season, junior Hannah DeVore is beginning to find her rhythm in the hurdle events. She won both the 100- and 300-meter events Thursday with 16.82 and 48.72-second clockings. She also contested the 200-meter dash for the first time this season and finished fourth in 27.68 seconds. DeVore finished off her day by teaming with Katelyn Prouty, Mackenna Jung and Auli Hanks to win the 400-meter relay in 52.53 seconds.

The Mingus girls were also strong in the jumping events as senior Maria Meacham was third in the triple jump at 31-10 and third in the high jump with a personal record jump of 4-8. Senior Auli Hanks was third in the long jump at an even 14-feet.

Senior Shayla Campbell-Kilburn was strong for Camp Verde in the throwing events, finishing third in the discus (90-09) and seventh in the shot put (27-04).

The middle distance events also yielded strong points for Camp Verde as sophomore Eliana Paniagua scored a fifth-place personal record in the 800 with a 2:41.15 clocking. Another sophomore, Chaeli Hoehn, also earned a PR in the 1600 with a 6:37 performance, which was good for eighth place.

Senior Alana Neary doubled up for Camp Verde in the hurdle events, finishing fifth in the 300-meter distance in 52.35 seconds and seventh in the 100-meter hurdles in 19.07 seconds.