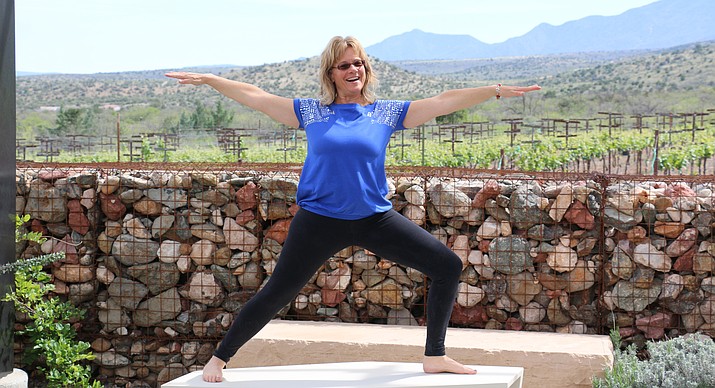 Yoga and wine enthusiasts are pairing up at the Southwest Wine Center (SWC) in Clarkdale, becoming kindred ‘spirits’ at a new monthly event called Sunset Yoga and Wine with Roxanne.

The event starts at 4:30 p.m. with Roxanne Wessel, a YC Verde Valley campus yoga instructor, leading a gentle, hour-long yoga class on the SWC patio against a backdrop of leafy vineyards and Mingus Mountain majesty. The meditative exercise is followed with a glass of YC student-made wine – the participant’s choice of a local red or white.

“Talk about relaxation. This is one of the best ways to unwind after a busy day or week,” Wessel said.

Sunset Yoga and Wine evolved from a conversation between Wessel and YC Enology Program Director Michael Pierce. Both agreed to follow the lead of other wineries around the world and pair yoga with wine in a beautiful environment. They priced the participant fees attractively: $11 includes yoga and wine. Yoga only is offered for $6 per person.

The first Sunset Yoga and Wine classes in February and March drew enough participants to fuel Wessel’s optimism. Additional classes are now scheduled at 4:30 on Fridays through July – on April 21, May 19, June 16 and July 21.

The Sunset Yoga and Wine classes are open to everyone 21 and older. Registration is not required.

Comparison of Bill Of Rights of US, Canada and Mexico

A huge attraction for many Canadian and Mexican visitors to the US generally and Arizona in particular Arizona is the freedom enjoyed by its residents as expressed in the Bill of Rights. While these rights are generally similar across North America, there are several key differences among the three countries. This talk will explore these similarities and differences from a layman’s perspective, based on the 10 Amendments to the US Constitution that make up the Bill of Rights.

John and Marg Chartrand first began coming to Arizona in the mid 70s and for the last 6 years have  been dividing their time between Cottonwood and a similar Canadian town 15  miles North  of  Ogdensburg, NY. They have been enjoying OLLI classes since first coming here. John holds degrees in Physics and Business Administration and before retiring in 2010 pursued a career in Finance with various private and public companies.  John is fluent in English, French and Spanish.

OLLI is a local, volunteer, peer-to-peer, adult education program (part of Yavapai College) that offers many learning groups and workshops each term for a nominal fee.  Its Spring term is underway, and over 140 classes and workshops are being offered.  For more information about OLLI or the Lunch & Learn programs, please call 928-649-5550 or visit www.yc.edu/ollisv.

Getting people interested in science can be a challenge, but Discover NASA: From Our Town to Outer Space, makes it fun. The exhibit includes stunning imagery, hands-on activities, and multimedia experiences such as a near real-time kiosk called, Eyes on Exoplanets; an immersive experience of astronauts living onboard the International Space Station; a touch table interactive where users can build their own solar systems; two large touchable meteorite samples, a wind tunnel interactive; and many more engaging activities.

“We are pleased that Camp Verde Community Library was selected to be one of eight sites nationwide to host the Discover NASA exhibit,” said Library Directory, Kathy Hellman. “People of all ages and backgrounds will find that the exhibition explores space science in a way that is understandable, captivating and relevant.”

The exhibition featuring interactive displays and hands-on activities will be accompanied by a series of programs and events, including Friday afternoon S.T.E.A.M. Time, Space Camp @the Library, presentations from Ken Zoll, Executive Director of Verde Valley Archaeology Center, night sky viewing and daytime solar viewing with Astronomers of the Verde Valley, programs from the Lowell Observatory outreach team, presentations from CVHS Astronomy teacher Matt Malloy, and much more. For a full schedule of events, visit www.cvlibrary.org or call 928-554-8380.

DISCOVER NASA: From Our Town to Outer Space, a traveling exhibit for libraries, s part of the STAR Library Education Network (STAR_Net) led by the National Center for Interactive Learning at the Space Science Institute. Discover NASA is supported through a grant from NASA.

Join the epic science-fiction & fantasy author of The Absolute Series at the Library on Saturday, April 22 from 10 a.m. to 2 p.m.

Angel Allendale describes herself as a manic-depressive tempest with a wandering soul, a desert rat at heart, and an explorer of mystic worlds. She began writing when she was 11 years old.

Allendale is a mental-health advocate whose intention is to be a good role model for girls ages 3—18. Allendale supports the National Alliance on Mental Illness, the largest grassroots organization addressing and challenging the stigma and difficulties of those with mental-health conditions. Her books offer a realistic voice to struggling young adults, as well as all those who have had struggles with mental illness.

Remember the fun swingin’ music of the 1940’s? Well, it’s back! EF Productions presents the 16th Annual Celebrate America: 1940s USO Holiday Radio Show, June 23-25 at 7pm nightly. Join us as we take you back in time to December in the 1940s. The show recreates a World War II USO canteen where soldiers would be fed and entertained. The production is done in the style of alive radio broadcast to the troops overseas. The show features a full cast and crew of over 100, live big band orchestra, swing dancers, and comedy acts.

There will be an open casting call to the community for anyone interested in being in the cast or crew. Auditions include speaking parts, non-speaking parts for extras, singing, choir, and dance/choreography. Participants should come prepared for their audition for acting, singing, and dancing. Scripts and music can be downloaded at www.efproductions.org. For those interested in participating in the many technical crews, they should also stop by during the casting call times to meet with the directors and producer.

Casting call will be Monday, April 24 and Tuesday, April 25 from 5pm-9pm. It will be held in the auditorium of Emmanuel Fellowship. Participants should stop by anytime during the hours listed for an audition.

Schedules and scripts will be available at the official Kick Off meeting on Sunday, April 30 at 1pm. The cast will be announced then as well. Rehearsals will begin in May.

The Camp Verde Community Library will present Game Night with Zack every Thursday from 6 to 8 p.m. at the Library, located at 130 Black Bridge Road.

The next game night will be Thursday, April 20. Zack Garcia, teens librarian, hosts the evening which features teens ages 12 to 17 playing games suc as chess, Magic:the Gathering; Pokemon and Mariokart.

The Verde Valley Detachment #1176 of the Marine Corps League, in partnership with The Prescott National Forest Recreation Program and the City of Cottonwood, will be holding a cleanup event at Black Canyon Day Use April 22. This effort will focus on removing recreational shooting debris and trash. If you are interested in giving back to your community and public lands consider joining us on this day.

Interested volunteers should arrive at 10 a.m. at the Black Canyon Day Use Site located at 5656 E. Black Canyon Drive, Cottonwood, AZ for a safety briefing and volunteer sign in.

The Forest Service has a strong commitment to safety and all volunteers must be equipped with long sleeve shirt, long pants, sturdy work boots, and eye protection. Tools, hard hats and leather gloves are provided. Be sure to bring sunscreen and enough water and food for 2 hours of service. For Safety purposes we are limiting the minimum volunteer age to 12 years old. Volunteers under the age of 18 must be accompanied by parent or legal guardian.

If you have any additional questions, comments or concerns about this event please feel free to contact Tom Palmer, East Zone Recreation Program Manager, tpalmer01@fs.fed.us or at 928-567-1114; or Steve McCoy, Marine Corp League Commandant, mclverdevalley1176@gmail.com

Join us at Rezzonico Family Park on Saturday April 22, 2017 from 1- 5 p.m. for an Earth Day Arts Fest and celebration of our ongoing park renovation. The event will kick off with an Arbor Day tree planting at 1:00 in support of our Tree City designation. This free community event will showcase upcycled art and the Verde River with music, environmental information, magic show, Farmer’s Market and a Tiny House display. Rezzonico Family Park is alongside Montezuma Castle Highway next to the new Community Library and the Verde River providing access for kayaking, fishing and bird watching. Camp Verde Parks & Recreation has developed a plan and started work on improvements to Rezzonico Family Park after nearly two years of being mostly used as a construction yard for the new Library. Come see the work done already and look at plans for the future.

Through the efforts of the Public Works Street crew and Maintenance crew damage from the construction yard has been repaired, the access road to the park has been rebuilt along with additional parking areas, drainage has been improved, a walking trail around the Park has been roughed in, excess pavement removed, and boulders installed to control vehicle access. Volunteers from The Nature Conservancy, Friends of the Verde River Greenway and REI volunteered with trash cleanup, and construction and improvement of trails and drainage near the river.

A perimeter fence has been installed along the East side of the Park matching fencing along Montezuma Castle Highway to help define the park and control pedestrian access. Our local volunteer group “The Old Guys” formed and poured concrete pads for telescopes for astronomers to use in our designated Star Park. Surrounded with a decorative stone circle this provides a great location for night sky viewing and other uses.

The Camp Verde Tree Advisory Committee is at work on developing a master planting plan for the Park to emphasize its natural environment using native and drought tolerant plants. Plans are in place for the construction of picnic ramadas, completing the walking trail as well as educational and interpretive signage. Our plan is to take advantage of this unique natural location as well as the resources available from the Community Library. Come see our plans as well as layouts for the proposed locations.

This event is an opportunity to enjoy the park and its displays as well view the Park plan, talk to staff, and see some of the completed improvements as well as the details of planned improvements. For more information contact Parks & Recreation at (928)554-0829. Reuse, recycle, renew

Saturday, April 22, between 2 and 4 p.m., meet Mike Cadwell, local astrophotographer and a member of the Astronomers of the Verde Valley. Mike’s photographs of the night sky will be hung on the walls throughout the library and he will be available to talk about the images on display and give a brief glimpse into what makes astrophotography so special.

Mr. Cadwell has been involved in the physical sciences for most of his life and has been photographing the night skies for over 40 years. The dark skies in the Verde Valley area favor the long exposures required for beautiful astrophotographs of galaxies, nebulae and star clusters, some you may have seen before and some you probably have not. This exhibit will showcase some of the most colorful and unique objects to be found “out there” in deep space.

Camp Verde Community Library is pleased to host Mr. Cadwell’s astrophotographs throughout the Discover NASA: From Our Town to Outer Space exhibition arriving the first week of May and running through the end of July.

To learn more about this or any other program at the Library visit www.cvlibrary.org or call 928-554-8381.