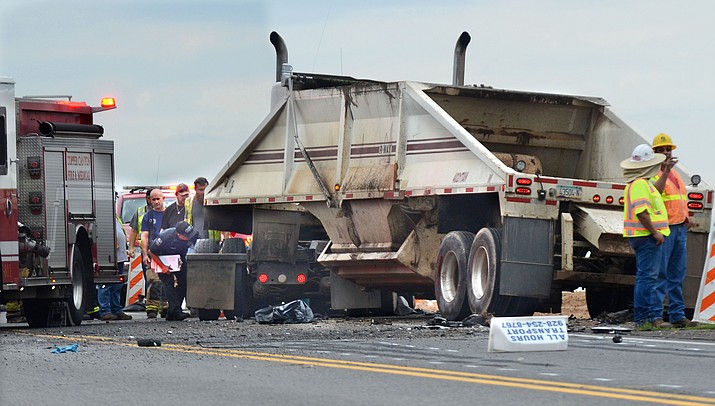 Around 6:16 a.m. Tuesday, the Camp Verde Marshal’s Office deputies responded to a serious two-vehicle accident involving the passenger transport van and a tractor-trailer. The driver of the van didn’t survive. (VVN/Vyto Starinskas)

CAMP VERDE – The driver who was declared dead on scene after a July 25 collision on SR 260 at milepost 215.3 in Camp Verde, near Cherry Creek Road, has been identified as Rockwell Christian Lee.

Around 6:16 a.m. that morning, the Camp Verde Marshal’s Office deputies and Copper Canyon Fire and Medical Authority crews responded to a serious two-vehicle accident involving the passenger transport van and a tractor-trailer.

The van, driven by Lee, was a white 1996 Dodge Grand Caravan, operating as an All Hours Transportation taxi, said CVMO Public Information Officer Darby Martin in a news release.

The tractor-trailer was a white 1998 Kenworth truck used by the OOthoudt Brothers company, added the release.

“Initial investigation at the scene indicates the tractor-trailer was headed eastbound with the van heading westbound when the collision occurred,” said Martin.

Lee was declared deceased at the scene, according to the release, and was extricated from the vehicle by CCFMA. The driver of the tractor-trailer denied any medical treatment, according to CCFMA.

“The scene immediately became a multi-agency effort, with assistance from surrounding agencies including, the Copper Canyon Fire and Medical, Arizona Department of Public Safety, Arizona Department of Transportation, the Yavapai County Sheriff’s Office, and the Yavapai Apache Police Department,” said Martin. Driver impairment of either driver is unknown, said CVMO in a previous release, however it appears the driver of the van crossed the centerline striking the tractor-trailer.

The collision resulted in the closure of the highway. The accident remains under investigation with assistance provided by DPS.