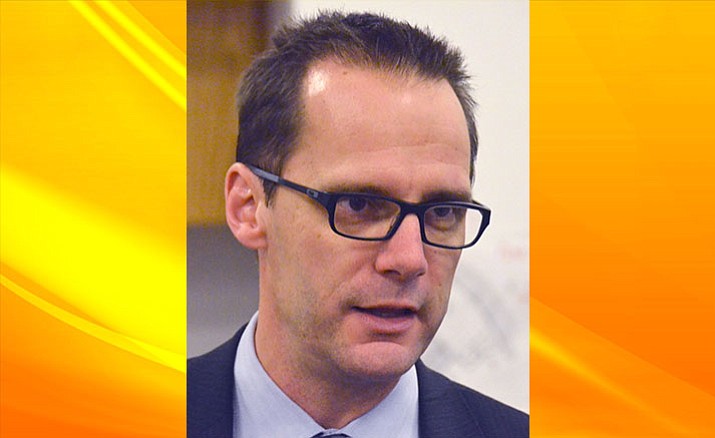 COTTONWOOD – It wasn’t just that Tim Carter conducted close to 14 hours of interviews in barely 29 hours.

Looking for a replacement for Robb Williams on the Mingus Union High School District governing board would not be easy. But it would probably be quick, the Yavapai County School Superintendent said.

Committed to interviewing, selecting – then appointing a replacement – and then announcing same said appointment, all since Thursday, Carter whittled his list of nine candidates to one.

Steve Gesell, police chief with the City of Cottonwood, is Carter’s choice to join the Mingus Union school board. In a press release announcing the appointment, Carter stated that Gesell will represent the residents of the district “extremely well.”

“He exhibits a cooperative spirit and a service-oriented attitude, has a history of working in concert with others, and listening to diverse opinions,” Carter stated. “He interviewed extremely well, showing substantial knowledge of school operations and procedures.”

Having served on Mingus Union’s two most recent superintendent search committees, Gesell’s “understanding of educational structure may stem from the parallel that school districts have with city councils,” Carter said.

“He should complement the existing board members very well, while bringing different perspectives, and a strong personality,” Carter said.

Though Mingus Union board president Anita Glazar has never met Gesell, she said the board will “appreciate his perspective and work in making our district even more productive and progressive.”

With a father about ready to retire from his professorship at Arizona State University, education has always been important in the Gesell family.

A Verde Valley resident for about 18 months now, Mingus Union’s newest governing board member said it was the right time to find “another way of making a difference.”

Of Carter’s appointment, Gesell said he is “very humbled.”

“This is a very important calling,” Gesell said.

Following six Thursday and three Friday interviews, Carter availed himself to the community for one-on-one feedback before meeting one-on-one with Mingus Union board members, then speaking with various administrative personnel.

“That way, everyone could tell me what they want to tell me,” Carter said. “Then after a couple of sleepless nights, I’ll make a decision.”

Cottonwood resident John O’Donnell was one of several to visit with Carter following Friday’s final interview.

Gesell’s appointment to the board expires on Dec. 31, 2018. Carter stated that Gesell and each of the other candidates are “encouraged” to run during the November 2018 election, when there will be three openings, including Gesell’s seat.

Two of the openings will be for four years, the other – Gesell’s seat – is for a two-year term.